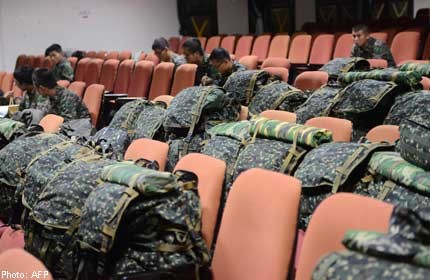 Backpacks fill the seats as members of Taiwan's military stand by as Typhoon Usagi lashes southern Taiwan, in Hengtsun, Pingtung county on September 21, 2013.

TAIPEI - China's arms buildup over the last two decades would give it the power to invade Taiwan by 2020 even if allies came to the island's aid, a military report said Tuesday.

The mainland's annual military spending has grown on average by double-digit rates over the past 20 years or so, according to Taiwan's 2013 National Defence Report.

Aside from military might, it said, China's capacity for weapons research and manufacturing had greatly increased, "which has boosted its military deterrent and posed a grave threat to Taiwan".

Among the new weapons China had acquired, both locally produced and purchased from Russia, were nuclear-powered and conventional submarines, strategic bombers, stealth fighters, early warning aircraft and ballistic and air defence missiles, it said.

"With the continued arms buildup, the Chinese communists will be able to take Taiwan by force before the end of 2020," it said.

The report also cited China's growing military capability to deter foreign intervention, in contrast to the US Pacific pivot policy which it said had been "stifled" due to budget constraints.

The United States is Taiwan's main ally. In 1996 it sent two aircraft carrier battle groups to waters near the island after China lobbed missiles into the sea to try to deter Taiwanese from voting for President Lee Teng-hui.

The report said China's military, known as the People's Liberation Army, has a total strength of 2.27 million of which the army accounts for 1.25 million. About one-third of its army is deployed directly opposite Taiwan.

Military analysts say China has targeted the island with at least 1,600 ballistic missiles.

Despite the potential military threat, Taiwan is cutting its own defence spending, with the number of troops due to be reduced to 215,000 next year from the present 240,000.

Ties between Taipei and Beijing have eased markedly since Ma Ying-jeou of the China-friendly Kuomintang was elected in March 2008 on a platform of ramping up trade and tourism links. He was re-elected in January 2012 for a second and last four-year term.

But Beijing still refuses to renounce its use of force should the island declare independence, even though Taiwan has ruled itself for more than 60 years.