Taipei - A man who used a stolen samurai sword to attack a military police guard outside Taiwan's presidential office in August has been charged with attempted murder, prosecutors said Friday.

Wielding the sword and carrying the national flag of China, Lu Chun-yi slashed the guard, who was trying to prevent him from entering the complex, in the neck, face, and hands, before being arrested.

The 51-year-old, who has been detained since the August 18 attack, has said he wanted to fly the Chinese flag in the presidential office, and was carrying hand-written notes threatening to "behead" President Tsai Ing-wen. 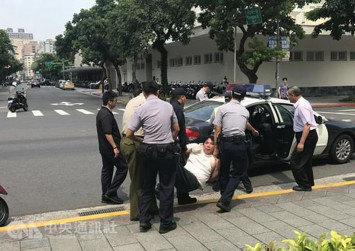 The notes, found in his backpack, also expressed his willingness to die as well as his hopes for China to unify Taiwan soon, according to prosecutors.

Taiwan is a self-ruling democracy, but Beijing still sees the island as part of its territory to be reunited even though the two sides split in 1949 after a civil war.

Relations with China have deteriorated since Tsai took power last year as she has refused to agree to Beijing's stance that Taiwan is part of "one China".

Prosecutors sought a seven-year jail term for Lu, saying that he has shown no remorse for his actions.

"(Lu) tried to portray himself as a martyr to justify or heroise his criminal behaviours," the Taipei district prosecutors' office said in a statement.

Lu was also charged with five lesser offences including theft, as he stole the samurai sword from a military history museum by smashing a display case with a hammer.

The sword is carved with the phrase "Nanjing battle, (this sword) killed 107 people" and is believed to have been used by Japanese soldiers during the Nanjing massacre in 1937.

The presidential office complex and its surroundings in the centre of the capital have been the target of attacks before.

In 2014, a driver tried to smash his vehicle into the front door of the nearby presidential residence, several months after a man rammed a huge truck through a bullet-proof screen and into the main gate of the presidential office.

There were no injuries from either incident, apart from one of the drivers who was hurt.