Taipei’s streets are quiet as Taiwan continues to battle a Covid-19 outbreak.

Taiwan is to set up Covid-19 testing stations all over the island to test for viral infections as the number of domestic cases continues to rise.

On Thursday (May 20), an additional 286 locally transmitted infections were reported with 87 in Taipei and 157 in New Taipei – the two cities with the largest number of domestic cases – according to Health Minister Chen Shih-chung.

Elsewhere on the island, new cases were also reported in some cities and counties in northeastern, northern, central, and southern Taiwan.

The new cases bring the number of locally transmitted infections to 1, 577 for the past 10 days and to 1,669 since the pandemic began. There were also nine imported cases on Thursday, taking the combined total to 2,825, with 15 deaths.

The recent spike prompted health authorities to raise the alert level for the entire island to three in its four-tier system on Wednesday and to tighten social distancing measures.

The decision to set up testing stations was taken on Thursday at a meeting between the Central Epidemic Control Centre and the heads of Taiwan’s 22 local city and county administrations to coordinate efforts to contain the disease and distribute medical resources.

“The stations will be set up at potentially high-risk hotspots in each city and county,” said Chen Tsung-yen, deputy commander of the centre.

“Those who have symptoms or contacts with people suspected to have Covid-19, or who have visited places where a confirmed case was reported are urged to take the viral tests at the stations.”

Chen said that in addition to discussing issues including distribution of medical resources and vaccines, the 22 local governments were authorised to make public tracing results or the places where an infected patient had visited. 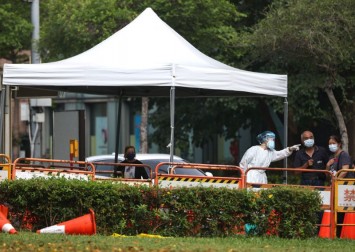 The local governments were also asked to step up their efforts to combat disinformation which created panic in local communities and sabotaged the trust and image of the government, he said.

“Those found to have circulated rumours and disinformation would face a maximum fine of NT$3 million (S$143,000) and a jail sentence of up to three years.”

President Tsai Ing-wen’s government has been the subject of rumours that it was impotent in its handling of the pandemic and dropped its guard, resulting in the latest outbreak.