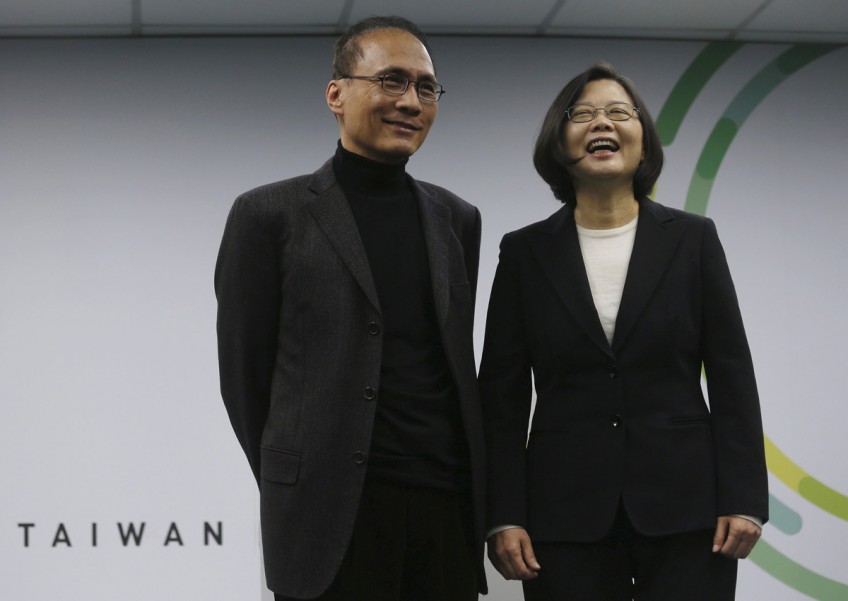 When Professor Lee Chih-kung was announced as Taiwan's incoming Economic Affairs Minister two weeks ago, there was collective bemusement across the island.

The academic at National Taiwan University is known for his groundbreaking research in engineering science. But he has zero industry experience. The 57-year-old admitted to being shocked himself at the appointment. It was a "big surprise", he said during a press interview.

Three weeks before Taiwan's new President Tsai Ing-wen takes the reins on May 20, the shape and form of her government are filling out.

Over the past weeks, the man she picked to be the premier - economist Lin Chuan who was finance minister in former president Chen Shui-bian's government - unveiled his 36 Cabinet members in batches. On Thursday, the process was completed.

In broad strokes, it looks like this: a PhD Cabinet that is overwhelmingly male (there are just two women) and older than expected (many are in their 60s).

Many are drawn from Ms Tsai's inner circle in the pro-independence Democratic Progressive Party (DPP) or were Mr Lin's classmates or colleagues at the National Chengchi University.

Reactions from the Taiwanese public have been lukewarm so far.

Political commentator Niu Tse-Hsun of the Chinese Culture University says: "To the outside world, it's not a particularly impressive line-up."

Faced with a public that is cynical of politicians and yet expecting improvements to their lives, the Cabinet, to be sworn in on May 20, will have its work cut out to win them over.

After 16 years of the Chen and Ma Ying-jeou administrations - years during which "Taiwan's political and economic systems have remained stalled" as described by a United Daily News editorial - Taiwanese are viewing the new faces with a mix of hope and wariness.

"We can just hope for the best. But it feels like the politicians care more about one-upmanship than people's lives," says Ms Jessie Wang, 46, a taxi driver and resident of the southern resort town Kenting.

The disdain has, in turn, made the work of drawing top talent into the Cabinet much harder.

Mr Lin, for instance, said he had approached many experienced industrialists to head the economic affairs portfolio - a critical one given the ailing economy - but was turned down.

Explains Dr Niu: "People with high social standing don't want to be in government because they are unable to cross the blue-green divide.

Also, they are often attacked by the legislators who show little respect for the ministers." The blue-green divide refers to the political schism in Taiwan between the pro-unification (blue) and pro-independence (green) camp.

Now, Prof Lee the academic will have to overcome reservations as to whether a man with few links with the business world will be able to get things done.

"A lot of industry bigwigs didn't even know who he was," says Dr Niu. "So, without connections, and understanding, how are you going to forge industry links and improve the economy?"

Responding to criticisms of his Cabinet members' age and gender, and the paucity of "big names", Mr Lin stressed that what matters most is capability. "Professionalism, ability and experience are the only conditions I would consider," he told the local media.

The past two presidents have been criticised for not using talent well. While Mr Chen relied on "corrupt" cronies, Mr Ma tapped on technocrats and academics who were "out of touch" with the grassroots, and towards the end, they fled the latter's increasingly unpopular administration, wrote the UDN editorial.

"Cronyism and selfishness ruled the roost. They were hardly qualified to lead the nation."

It stressed: "Tsai Ing-wen must learn from Chen and Ma's recruitment mistakes. She must attempt to create a new political atmosphere. Only then can she enable Taiwan to extricate itself from the quagmire."

For now, Ms Tsai earns some nods for trying to bring in a few people across the political spectrum including independents and some Kuomintang members.

For instance, career diplomat Katherine Chang has been made the Mainland Affairs Council minister overseeing cross-strait relations. Previously in charge of north American issues in the foreign ministry, she is seen as a safe, if bland, choice.

"Ms Tsai wants to show goodwill," says Dr Niu. "Instead of appointing a traditional DPP politician which Beijing will view as confrontational, Ms Tsai chose a person who is like a blank piece of paper."

This is also partly because Ms Tsai herself will be crafting the policy, with Ms Chang as the executor.

But concern has surfaced over the number of people from the previous Chen administration in the new Cabinet, estimated at one-third.

To this, Mr Lin said: "Do not assume that if someone was a member of the Chen administration, he must be bad."

A couple have also already raised eyebrows over controversial statements. Minister without portfolio-designate Chang Ching-sen - a key figure in Ms Tsai's presidential campaign - derided a family who were the victims of a forced demolition project in Shilin, Taipei, and whom the DPP had supported, sparking calls for his appointment to be rescinded.

For now, people are in a wait-and-see mood. Kaohsiung resident Lee Yu-tung, 63, a retired factory worker, said: "Whoever they are, they can't be worse than those in Ma Ying-jeou's administration."

In an acknowledgement of the feedback thus far, Ms Tsai said on Thursday that whatever "adjustments that need to be made will be made", as the DPP evolves from being the opposition to becoming the ruling party.

She pledged: "I hope we will become the best government in Taiwan's history."

When introducing Mr Lin as her pick for premier, President-elect Tsai Ing-wen said: "He is the person most familiar with my political convictions and plans for the nation." This will be critical. As premier, Mr Lin will have the job of translating Ms Tsai's vision into policies.

He has no party affiliation but has long been associated with the Democratic Progressive Party (DPP).

He was finance minister in the Chen Shui-bian administration, and later helmed the party's think-tank Thinking Taiwan Foundation.

This will serve him well, given the pressing need for the new government to reform the economy.

Articulate and fluent in English, Dr Wu - he holds a PhD in political science from Ohio State University - has been the suave face of the Democratic Progressive Party (DPP) as its secretary-general in the post-Chen years.

Now, he will be wielding great influence in the powerful position of National Security Council chief, coordinating and directing policies relating to Taiwan's security issues.

He is expected to have enormous input in triangulating Taiwan's position vis-a-vis China and the United States.

He served in the Chen administration in various capacities including as Taiwan's representative to the US. He was also Mainland Affairs Council Minister, taking over from his current boss, Ms Tsai.

Three years ago, in an interview, she characterised Taiwan's relationship with mainland China as being in its "best shape" since 1949.

She will now have the challenge of maintaining it, having been appointed the top official in charge of cross-strait relations.

She is expected to be a steady pair of hands, who will faithfully execute Ms Tsai's instructions.

A career diplomat, she filled senior posts as Taiwan's representative to Australia and Britain. She also chaired the Coordination Council for North American Affairs in the Foreign Affairs ministry.

She has a bachelor's degree in diplomacy from National Chengchi University, and also a master's degree in international relations from Long Island University.

This article was first published on May 2, 2016.
Get a copy of The Straits Times or go to straitstimes.com for more stories.