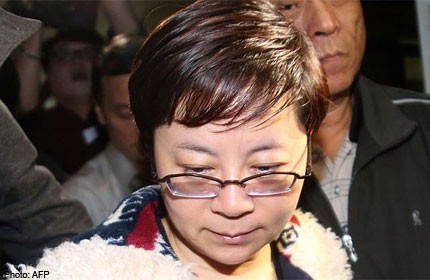 TAIPEI - A Taiwanese politician known for her close ties with the president and currently on trial charged with taking bribes has been released on bail, court officials said.

Lai Su-ju, a member of the Taipei City Council, went on trial on August 9 and was released on bail of Tw$15 million (S$640,925) late Friday, said the Taipei district court.

She was charged in July with soliciting a Tw$10 million bribe, of which she already received Tw$1 million, to help facilitate a massive construction project in the capital, according to prosecutors.

Lai, who had been detained since March, has admitted accepting Tw$1 million but claimed it was a political donation rather than a bribe.

The 49-year-old was a rising star in the ruling Kuomintang (KMT) party chaired by President Ma Ying-jeou and formerly served as its spokeswoman. She was also the director of Ma's office in the KMT.

As a lawyer, she had represented Ma and other top politicians in several high-profile court cases.

She became the second KMT politician with close links to the president to be implicated in corruption scandals, after former party vice chairman and top cabinet official Lin Yi-shih was indicted on bribery charges last year.

Taiwan has been rocked by a string of corruption scandals involving top officials in recent years, including ex-president Chen Shui-bian who is serving a 20-year jail term on multiple graft convictions.