Taiwan's Ma to start foreign tour with discreet US stopover 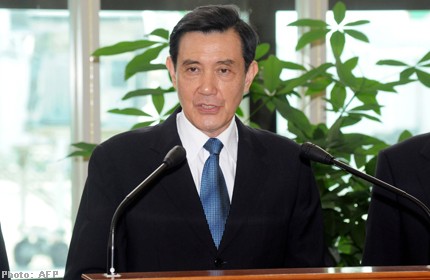 TAIPEI - Taiwan's President Ma Ying-jeou departed Sunday for a tour of Paraguay and the Caribbean but has tried to keep a US stopover low-key to avoid upsetting China, officials said.

Ma's office was tight-lipped about what will be his first stopover in New York since he took office in 2008. He was re-elected in January 2012.

"It is not convenient for us to give details of President Ma's itinerary in New York," Ma Wei-kuo, deputy spokeswoman for his office, told AFP.

Ma's predecessor Chen Shui-bian of the China-sceptic Democratic Progressive Party made high-profile US transit visits which sparked protests by Beijing to Washington.

China opposes any overseas visits by officials from Taiwan, which it still regards as part of its territory awaiting reunification. Washington switched diplomatic recognition from Taipei to Beijing in 1979.

Local media said Ma plans to meet New York Mayor Michael Bloomberg as well as US congressmen and entrepreneurs. It said he would visit the Ground Zero Memorial, Chinatown and New York University, where he received his law school master's degree.

Unlike his predecessor, Ma has promoted detente with China. The two former bitter rivals have opened up direct flights and forged 18 agreements covering areas ranging from banking to crime-fighting over the past five years.

A historic trade pact was signed in 2010.

Despite the eased tensions, Taiwan still cherishes its 23 diplomatic allies, who formally recognise Taipei instead of Beijing.

Almost all of them are in Africa, Latin America and the Pacific and many are developing nations.

"The trip to Paraguay, our sole ally in South America, is to attend the presidential inauguration of Horacio Cartes. Hopefully the visit can help cement diplomatic ties," Ma told reporters and guests seeing him off at the airport.

His trip will also take him to Haiti, Saint Christopher and Nevis, St Lucia and St Vincent and the Grenadines. It will be the first visit to Haiti by a Taiwanese president.

Ma will make a stopover in Los Angeles on his way back to Taipei on August 22.