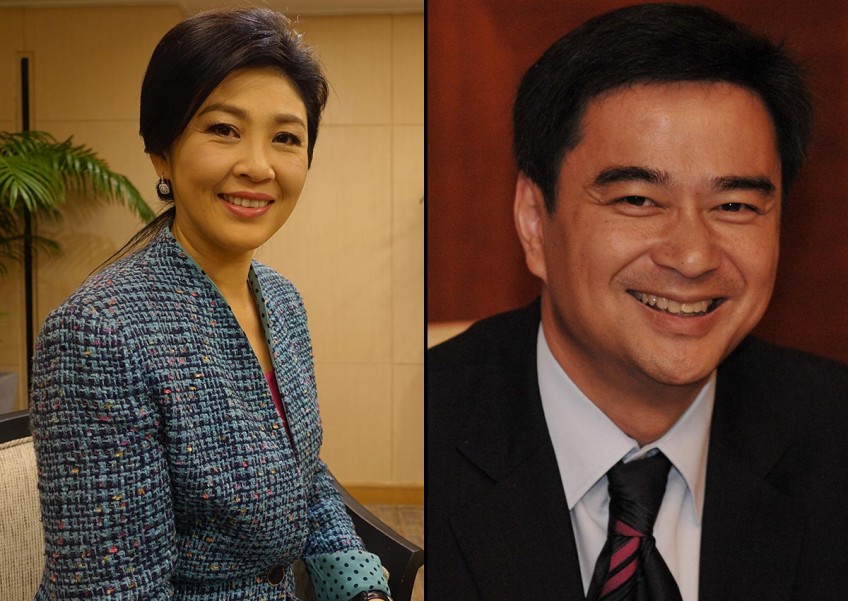 The investigation reportedly focuses on Cabinet members from the previous governments of Yingluck Shinawatra (left) and Abhisit Vejjajiva.
The Straits Times

Thirty-eight former Cabinet members from the previous governments of Abhisit Vejjajiva and Yingluck Shinawatra have come under the microscope over their tax records, a media inquiry has found.

They are being targeted in a move by the Office of the Auditor-General to have the Revenue Department determine whether the politicians had paid proper taxes on their incomes while in office.

The focus was on former political office-holders with earnings exceeding 5 million baht (S$203,000), according to Auditor-General Pisit Leelavachiropas. But he did not identify the politicians.

An inquiry by the Kom Chad Luek Online team, which is part of the Nation Multimedia Group, revealed that 38 former Cabinet members - 19 from each government - met the profile hinted at by the Auditor-General.

Mr Pisit said that those politicians were not "unusually wealthy" - a euphemism that suggests corruption - but the authorities simply were interested as to whether the taxes they had paid correlated with their earnings exceeding 5 million baht.

According to the Auditor-General, more than 60 politicians were initially targeted in an investigation by his office and that they were affiliated with political parties other than Pheu Thai and Democrats - the country's two largest.

"The Office of the Auditor-General is not going after any person in particular, as has been alleged. We are scrutinising everyone," Mr Pisit said.

The research by Kom Chad Luek Online discovered that 19 members of the Abhisit government, serving between December 2008 and August 2011, earned more than 5 million baht while in office.

Eleven of them came from then ruling Democrat Party, seven from other coalition partners - five Bhum Jai Thai Party politicians, and one each from Puea Pandin and Ruam Jai Thai Chart Pattana parties - as well as a non-politician with no political affiliation.

The inquiry also found that 19 members of the Yingluck government, serving from August 2011 to May 2014, earned more than 5 million baht. Of those government ministers, 15 came from the coalition leader Pheu Thai Party, two from ally Palang Chon Party, and one each from the smaller Chart Thai Pattana and Chart Pattana parties.

Read also: Yingluck may be unable to pay 35 billion Baht in civil liability