Chaos returned to the streets of a northern Hong Kong district on Monday night, as riot police deployed tear gas to disperse anti-government protesters who barricaded roads during a rally to mark the three-month anniversary of the Yuen Long attack.

Protesters, mainly masked and wearing black, occupied a section of Castle Peak Road - a main thoroughfare in the Yuen Long district - and set up makeshift barricades to block traffic at about 8pm.

Riot police soon moved in, confronted by protesters who shone laser pens and hurled abuse at them.

Officers repeatedly warned the crowd that force could be used to disperse them as they were taking part in an unlawful assembly. But protesters remained defiant, and at about 9.30pm police fired the first round of tear gas.

That led to a game of a cat and mouse, with protesters splintering off as police advanced and regrouping after officers moved away.

Protesters reportedly threw petrol bombs at the Shap Pat Heung rural committee building on Yau Tin East Road. A No 1 alarm occurred at the committee's address at around 10.30pm, according to the fire service. At about 11.45pm, riot police fired tear gas as a protester threw a suspected petrol bomb on the ground near Hong Lok Road Light Rail stop.

A cardboard box with wires and a device on the top was left on Light Rail tracks, but police said they had no information on any reports of suspected bombs in Yuen Long by midnight.

Dozens of riot police remained on the streets into the early hours of Tuesday for a dispersal operation. Several people were detained over the course of the evening, including a man who was bleeding from the head.

The protest movement is still demanding justice over the events of July 21, when a white-clad mob armed with sticks and metal rods stormed the MTR station, indiscriminately assaulting protesters returning from a mass rally along with other commuters and bystanders. By the time police arrived, the men, some of whom were suspected triad members, had fled.

Some 45 people were injured in the attack. 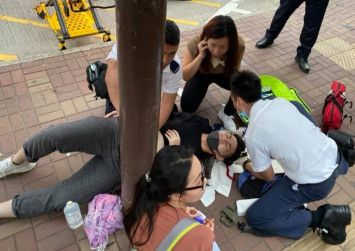 A woman in her 50s, who gave her surname as Tang, ran into the trouble on Monday night on her way home.

"What have police done since July 21? There were more than 100 attackers but there are 30,000 in the force. How many have they arrested for the crime?" she said.

Senior Superintendent Steve Li Kwai-wah of the organised crime and triad bureau denied police had been dragging their feet in the investigation. Li said on Monday that 34 men, aged between 18 and 60, had been arrested in connection with the July 21 attack. Six had been charged with rioting.

Minor scuffles also reportedly broke out between protesters and some pro-government residents on Monday night. Riot police stepped in and separated the two groups.

Online calls had gone out for protesters to rally at the station at 7pm. But the station closed at 2pm, with riot police starting to take over.

The mall also closed early at 5pm and shops shuttered. Scores of protesters, many of whom were dressed in black and wore masks, sat on the floor of the mall's atrium from 7pm. One protester sprayed graffiti on the floor, reading: "Do not forget July 21. In three months, how many have been arrested?" 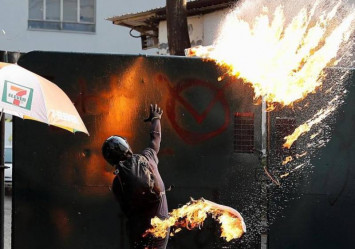 At Causeway Bay station, more than 30 people staged a peaceful sit-in outside the station control room in the concourse from 7.30pm.

Posters displayed the words "Popo [Police] and gangs work with each other" and a video of the attack was played to passers-by in the station. They also chanted slogans and sang protest songs including Glory to Hong Kong. A passer-by who supported their action told them: "Add oil, be careful and please stay safe."

Chan, 35, who works in the education sector and joined the sit-in after work, said she had not trusted the police force since the attack in Yuen Long. "We want to send a message to police, that Hong Kong citizens haven't forgotten about what happened on July 21," she said.

Another protester, in his 30s, said he had planned to join the sit-in at Yuen Long station but since it was closed went to the one in Causeway Bay instead. He said he wanted to express anger over the MTR's handling of the incident as well as its recent early closure of stations.

"The MTR had changed its stance towards protesters since July 21," he said. "They had a 180-degree change and became a tool for the government after state media slammed them [for helping protesters]."

At Mong Kok station, nearly 100 people joined the sit-in. Many wore masks. A passer-by gave them a thumbs-up as some chanted slogans including "Take the bus, boycott the MTR".

A similar rally last month in Yuen Long degenerated into violence, with protesters building barricades, setting fires and hurling petrol bombs. On August 21, 1,000 people joined a sit-in at the station. That rally also ended in violence and some protesters damaged station facilities.

Police had said the late response on July 21 was partly because of insufficient manpower as the force was busy dealing with a protest near Beijing's liaison office in the city, on Hong Kong Island, earlier that day.

Protesters painted graffiti on the outer walls of the complex and threw ink on the state emblem on display there. The 999 emergency hotline was reportedly jammed by 24,000 calls in three hours, amid an online protest campaign.