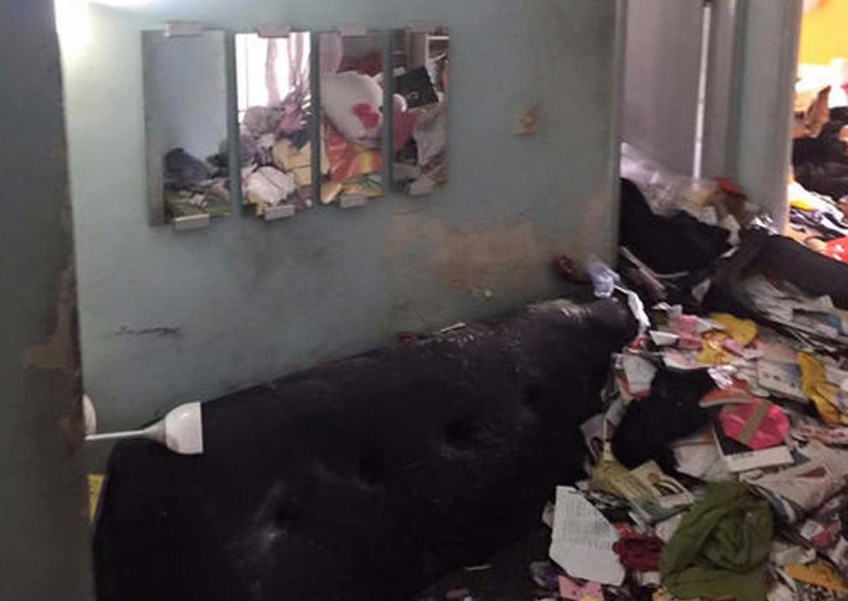 Newspapers, magazines and clothes strewn all over the rental apartment in Sha Tin. The orange couch had turned black. There were cockroaches and fleas, and the furniture was damaged.
Shin Min Daily News

It is a landlord's worst nightmare.

The head of a property owners' group was shocked by the sight - and stench - that greeted him when he entered a rental apartment in Sha Tin in May.

He was there to help the owner seize the unit back from an errant tenant.

Mr Diamond Shea, chairman of Hong Kong Owners Club, shared pictures of the flat on social media, describing it as "the most terrible case" he had encountered in years.

He told newspaper hk01 that the unit's neighbours had been complaining of a foul smell and trash outside the front door.

Mr Shea enlisted a locksmith to unlock the front door, but had difficulty getting in because the walkway was obstructed by a metre- high pile of newspapers, magazines and clothes.

When he finally managed to get inside, he found himself in "a paradise for cockroaches and fleas", reported South China Morning Post.

"We estimated there were more than 1,000 cockroaches, with fleas too.

A couch, which was originally orange, had become black.

The unit was in a damp condition and the bedding and furnishing mildewed.

All the wooden furniture was wet and damaged beyond recovery, he said, adding that he was shaking when he took the photos.

The tenant, a woman in her 50s, had rented the apartment for four years, but she stopped paying rent several months ago.