Tens of thousands flee vast cyclone bearing down on India 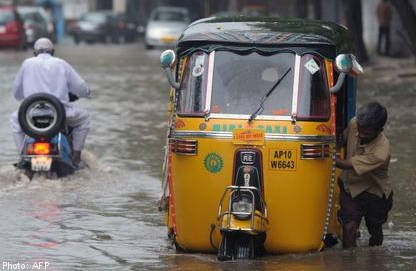 An Indian auto-rickshaw driver pushes his three wheeler through water logged streets during heavy rains in Hyderabad on October 9, 2013.

KALINGAPATNAM/BHUBANESWAR, India - Tens of thousands fled their homes in coastal areas of eastern India and moved to shelters on Friday, bracing for the fiercest cyclone to threaten the country since a devastating storm killed 10,000 people 14 years ago.

Large waves were already pounding beaches in the state of Andhra Pradesh over a day before Cyclone Phailin was due to hit. Villagers were evacuated to schools in the north of the state and in neighbouring Odisha, while panic buying drove up food prices.

Satellite images showed Phailin some 500 km (310 miles) off the coast in the Bay of Bengal and likely to make landfall on Saturday evening, with widespread flooding expected from surges.

The images showed the storm covering an area roughly half the size of India. Some forecasters likened its size and intensity to that of hurricane Katrina, which devastated the US Gulf coast and New Orleans in 2005.

Some 260,000 people were moved to safer ground and more were expected to be evacuated by the end of the day, authorities in the two states said. Not everybody was willing to leave their homes and belongings, and some villagers on the palm-fringed Andhra Pradesh coast said they had not been told to evacuate.

"Of course I'm scared, but where will I move with my family?" asked Kuramayya, 38, a fisherman from the village of Bandharuvanipeta, close to where the hurricane is expected to make to landfall, while 3.5-metre (12-foot waves) crashed behind him. "We can't leave our boats behind."

The Indian Meteorological Department said Phailin would hit between Kalingapatnam in Andhra Pradesh and the major port of Paradip in Odisha state and predicted flooding from expected storm surges of about three metres (10 feet) above normal tides.

There was disagreement about the power packed by Phailin although most forecasters expected it to weaken upon reaching the coast. The Indian Meteorological Department described it as a "very severe cyclonic storm" with wind speeds of 210-220 km per hour (130-135 mph) and resisted upgrading it to a stronger"super cyclone."

But the US Navy's Joint Typhoon Warning Centre predicted gusts of up to 315 kph.

"Phailin will be no less than the 1999 super cyclone,"Odisha state's Special Relief Commissioner, Pradeep Kumar Mohapatra, told Reuters. He said half a million people were expected to move to shelters in the state.

This time, however, the state government said it was better prepared. It broadcast cyclone warnings through loudspeakers and on radio and television as the first winds were felt on the coast and in the state capital, Bhubaneswar. Indian authorities warned of extensive damage to crops, village dwellings and old buildings, as well as disruption of power, water and rail services. Shelters were being stocked with rations, and leave for government employees was cancelled.

"Within 12 hours of the cyclone strike, we will try to clear all the roads. Within 24 hours we will try to restore water supply and electricity," Mohapatra said.

Paradip stopped cargo operations on Friday, port chairman Sudhanshu Shekhara Mishra told Reuters. He said all vessels were ordered to leave the port, which handles coal, crude oil and iron ore. An oil tanker holding about 2 million barrels of oil, worth some $220 million, was among those moved, an oil company source said.

India's largest gas field - the Reliance Industries -operated D6 natural gas block - lies in the Cauvery Basin further down the east coast. The company said it was not expecting to be hit.

Katrina hit the US Gulf coast on Aug. 29, killing about 1,800 people, including many in New Orleans where levees failed to hold back storm surges.

It was one on the six biggest hurricanes - also known as cyclones and typhoons - ever recorded and caused $75 billion worth of damage.