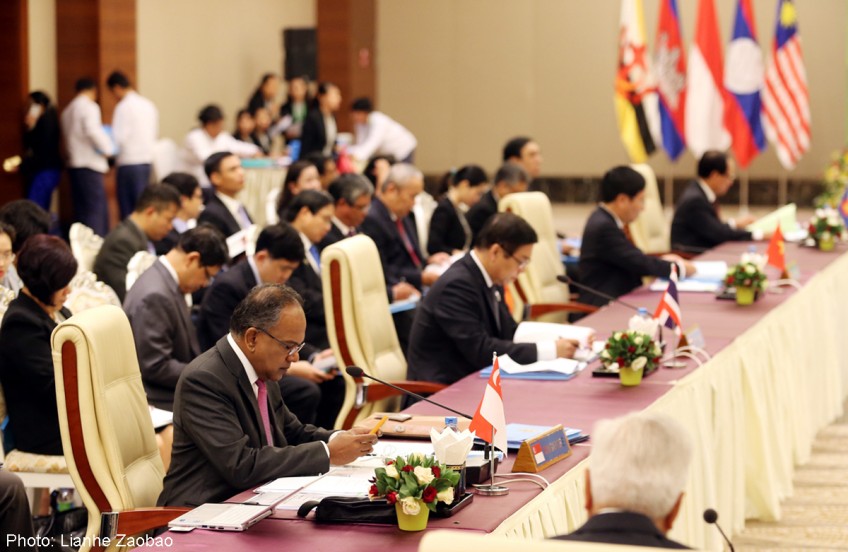 Hosted by the Myanmar President U Thein Sein, Asean leaders attended the Plenary Session of the 24th Asean Summit 2014

NAY PYI TAW, Myanmar - The foreign ministers of the 10 ASEAN member states issued a joint statement yesterday expressing "serious concerns" over recent incidents between China, Vietnam and the Philippines in disputed parts of the South China Sea which they said have raised tensions in the region.

The four-paragraph statement called on the parties involved to act in accordance with international law and to exercise self-restraint in managing disputes in the waters.

It reaffirmed the importance of peace and stability, maritime security and freedom of navigation in the waters, and pointed to the joint agreements that ASEAN has with China.

These agreements have underlined the need for peace, stability and mutual trust, and for self-restraint in dealing with disputes in the waters.

It also emphasised the need for "expeditiously working towards an early conclusion of the code of conduct in the South China Sea", a code that would legally bind all parties to manage and settle disputes without the use of force.

Foreign Minister K. Shanmugam said that failure to issue a statement on the incidents would have further damaged the credibility of ASEAN.

"Therefore there was a unanimous agreement that there should be a statement."

He added that it did not mean ASEAN has to take sides on the disputes, as "neutrality is not the same as keeping quiet".

It was a point also emphasised by ASEAN Secretary-General Le Luong Minh, who said that the recent incidents in the South China Sea run counter to all the joint commitments ASEAN has with China, with the most important principles being no use of force and peaceful resolution of disputes.

"This points to the seriousness of the situation and points to the importance of this new statement by the ministers," he told The Sunday Times.

Noting that tensions have been raised in the disputed waters each time there has been an important ASEAN meeting, Mr Minh said the statement would "test China's intentions" to conclude a code of conduct for the South China Sea.

Mr Minh added that he hoped the statement would make China realise that peace and stability in this region are important not only for ASEAN, but also itself and others concerned about the freedom of navigation and maritime security in the waters.

"So I hope with China's recognition of these interests we will be able to engage them in earnest, serious and substantive consultations," he said.

Asked whether these events have now overshadowed the ASEAN summit, Mr Minh said they have not, because peace and stability are needed for the development of ASEAN so that it can focus on community building.

"Peace and stability will be affected by the South China Sea," he said.

Last week, as leaders of the 10 ASEAN countries were due to meet, ships from Vietnam and China collided in disputed waters off the Paracel Islands, where China wants to set up an oil rig.

In a separate incident, the Philippines also detained crewmen of a Chinese fishing boat near the Spratlys.

The incidents mirrored the rise in tensions in 2012 prior to the ASEAN summit then, when under the chairmanship of Cambodia, the ASEAN leaders failed to issue a joint communique for the first time, due to differences on the South China Sea issue. That failure raised questions over ASEAN's ability to respond in unison.

The statement on the South China Sea was issued just before the leaders' summit, which kicked off last night with a dinner attended by Prime Minister Lee Hsien Loong and other heads of government.

Mr Lee arrived in Naypyidaw yesterday and will be in summit talks with the other ASEAN leaders today.

Thailand's Prime Minister will not be present, due to political turmoil that saw Ms Yingluck Shinawatra forced to step down by the courts.

Mr Shanmugam said: "Thailand is the second-largest economy in ASEAN. When Thailand undergoes turmoil, that impacts on the economy of ASEAN, impacts on all of us.

"But beyond that, more fundamentally and centrally, we as friends of Thailand want a peaceful resolution and solution that helps Thailand."