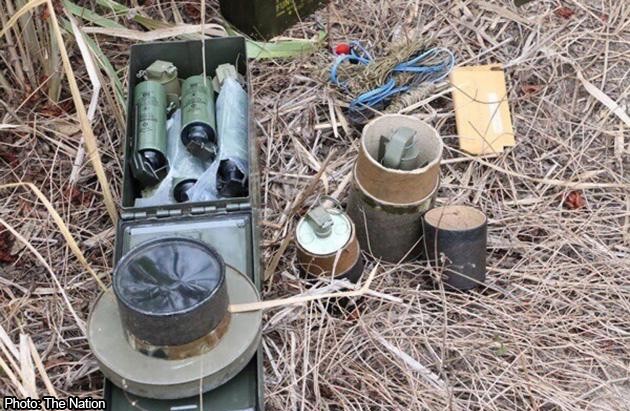 Hong Kong police said Monday they had arrested nine members of a "local syndicate" involved in making explosives and said at least one claimed to be a member of a radical group.

THE MOBILE Cabinet meeting scheduled on Friday and Saturday in Prachuap Khiri Khan will go ahead despite the discovery of explosives and assault rifle ammunition about three kilometres from the venue, Prime Minister General Prayut Chan-o-cha said yesterday.

He said the cache consisted of only a few items that did not seem to work and the location was quite far from the venue.

Interior Minister Anupong Paochinda said the explosives were outdated and he believed they were discarded by collectors after the coup when the junta initiated a crackdown on people with war weapons.

Defence Minister Prawit Wongsuwan said the weapons were probably not intended to disrupt the Cabinet meetings and an investigation was under way to try and find out who owned them.

The cache consisted of C-4 and TNT explosive bars and detonating wires, hand detonators, smoke and teargas grenades and munitions for M16 and AK 47 assault rifles.

Serial numbers were being checked to see if they belong to the Army.

They were found on Saturday evening near the Army-run Suan Son Pradiphat Rehabilitation Centre, the venue for the meetings.

Military ordnance personnel were quoted as saying that the explosives were useable but not wired to the detonators.

Some of the items were found in sacks with "Company 1 Battalion 1" written on them, it was reported.

Deputy Defence Minister and Army commander General Udomdej Sitabutr said that the sacks could have been taken from locations where the Army used them in flood-prevention projects after filling them with sand.

Royal Thai Police commander General Somyot Poompanmuang agreed the explosive and munitions were likely dumped after the junta took power. He said the discovery of the cache was not being used as a reason to maintain martial law.

Security for the Cabinet meeting was tight enough and would not be heightened, Somyot said.

An investigation was underway and would not be hastened or dictated by any time frame, he added.

It is unlikely the three incidents were linked, Prawut said.