Thai cop praised for calming down and hugging knife-wielding man 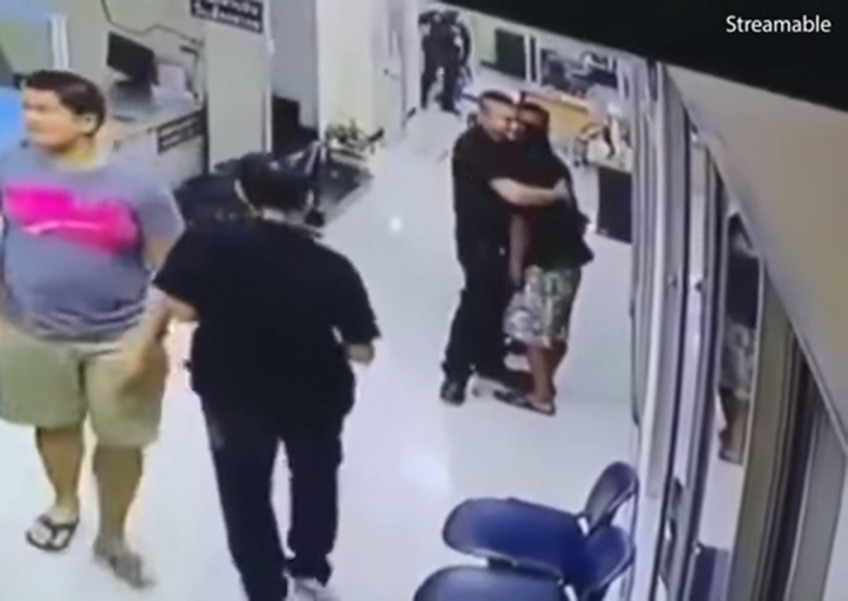 BANGKOK - A Thai policeman who negotiated and saved the life of a man who was threatening to kill himself in a police station, was praised on Friday by the national police chief Pol Gen Chakthip Chaijinda.

Senior Sergeant Major Aniruj Malee persuaded the man to calm down and surrender the knife he was holding to his own throat on June 17 at Kuay Kwang police station.

Video footage from the station's security camera showed Aniruj came out of his quarters and sat on a table to calmly talk to the man. Eventually the man handed over the knife to Aniruj.

Instead of handcuffing the man, Aniruj opened his arms and gave the man a bear hug. The man burst into tears.

Aniruy received a certificate from the police chief on Friday.

The police chief and the public learned of Aniruj's heroic acts after the video footage from security camera at the station recorded the incident and went viral worldwide on social media and other platforms.

He said that from talking with the man he learned that he was a musician and was under stress after his guitar was stolen and he lost money from a music show.

"I returned to the station only to find a man was threatening to kill himself with a knife. I negotiated with him and learned that he was cheated of his work's money and his guitar was stolen. I talked to him until he felt relaxed," said Aniruj, who had been trained in negotiation skills.

"I'm happy that I could save his life. However to help people and make them happy are the duties of police," he said.