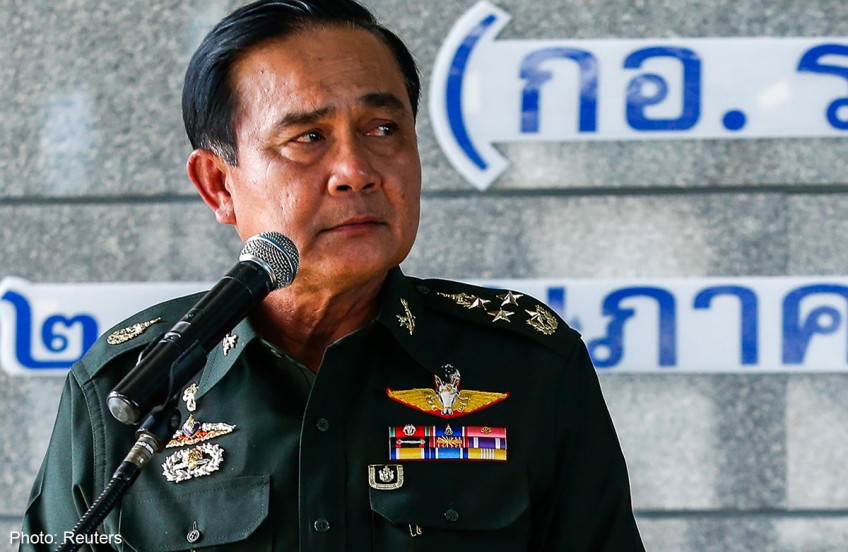 BANGKOK - Thailand's junta chief is set to meet the king Tuesday to win approval for an interim constitution that will map out year-long political reforms expected to curb the influence of fugitive ex-premier Thaksin Shinawatra.

It will be the first time the revered but ailing King Bhumibol Adulyadej, 86, has granted an audience to coup leader General Prayut Chan-O-Cha since the military seized power two months ago.

Prayut has ruled out holding elections until around October 2015, despite appeals from the United States and the European Union for a return to a democratic path.

The interim constitution, which has not yet been published, is expected to give an indication of how the military plans to run the country.

The junta, which has curtailed civil liberties, has said it plans to share power with a new interim government, with the military retaining control of national security.

The army chief seized power after nearly seven months of protests saw 28 people killed and paralysed the government of former prime minister Yingluck Shinawatra, who is Thaksin's sister, and her Puea Thai Party.

The new cabinet is expected to be picked by a junta-appointed national assembly which observers expect to be broadly subservient to the military.

The reforms could result in the lower house of parliament becoming partially appointed, like the upper house, said Kan Yuenyong, executive director of the Siam Intelligence Unit think-tank.

"The conservatives know that if they let a normal election happen again, the Puea Thai Party and Yingluck maybe can win another landslide," he told AFP.

He said the new constitution could also include an amnesty for the coup-makers.

But Kan added that there was also "a lot of political conflict within the conservatives themselves", so it was unclear how radical the reforms would be.

The Royal Household Bureau said in a brief announcement that Prayut would be granted an audience with the king at 5pm (1000 GMT) to receive the approved interim constitution.

Speaking at army headquarters on Tuesday, Prayut said the charter had already been endorsed by the monarch, describing the planned audience as an "important mission".

The junta chief received approval from the king - the world's longest-serving monarch - to run the country days after the May 22 coup.

On that occasion he did not meet Bhumibol, who has lived at his seaside palace in the resort of Hua Hin south of Bangkok since leaving hospital in August 2013 after almost four years.

The May coup was the latest chapter of a long-running political crisis broadly pitting Thaksin's billionaire family and its supporters against a royalist establishment backed by parts of the military and judiciary.

The army said the takeover was necessary to restore order.

But critics accuse the junta of using political unrest as an excuse to purge Thai politics of Thaksin's decade-long dominance.

The populist politician, who was seen by his opponents as a threat to the monarchy, was ousted by royalist generals eight years ago and lives in Dubai to avoid a jail term for corruption.

Yingluck was last week given permission by the military to travel overseas for the first time since the coup.

She is expected to attend Thaksin's 65th birthday party on July 26, but has vowed not to flee into self-exile.

Some see the long-running crisis as a struggle over who will hold the reins of power when Bhumibol's more than six decades on the throne eventually end.

At the same time it has sought to win public support with free concerts and a vow to crack down on graft and other problems afflicting society.

King Bhumibol, who has suffered from a range of ailments in recent years, commands great respect among many Thais.

His blessing has traditionally been a key step in legitimising the recurring military takeovers in Thailand, which has seen 19 actual or attempted coups since 1932.