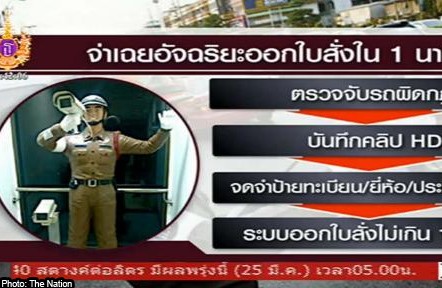 STARTING from next month, dummy traffic officers on some of Bangkok's roads will officially become "smart", as they will be able to catch violators red-handed via a newly introduced tech system.

The so-called "Smart Jah Choey" system can detect a vehicle that changes lanes in a zone where it is forbidden to do so - and then issue a traffic ticket within a minute.

As the system will catch violators red-handed by recording their traffic offences in still photos or moving pictures, there will be solid evidence to back up the issuance of tickets.

Developed through collaboration between the Thailand Research Fund, the Traffic Police Division and several other agencies, "Smart Jah Choey" has worked perfectly well during its ongoing trial period in the Suttisarn area.

Traffic police therefore believe the system is ready for actual use from next month. "The new system can reduce the workload of the police and also promote respect of traffic rules," Adul said.

"In the future, the system will be able to detect other traffic rule-breaking activities such as speeding, parking in unauthorised zones or riding a motorcycle without wearing a helmet," he added.

Research project leader Woralak Budsayarat from Naresuan University explained that the system worked by detecting vehicles that trespass over the bold line to change lanes in restricted areas, and then capturing a high-quality picture and video clip for the police as evidence of the offence.

"The system works using two separate parts. The first part is the automatic vehicle detection and analysis system, and the second is the automatic ticket-issuing system," she said, demonstrating the processes involved.

The automatic vehicle detection and analysis system can detect the vehicle's licence plate by using a sensor to locate and read the licence number in the picture, and can also identify the brand, colour and type of the offending vehicle, she said.

"The automatic traffic-ticket issuing system undertakes two tasks. First, it will analyse the pictures from all detection systems with the Traffic Police Division's vehicle-licence database, and then issue the traffic ticket. After the police check the ticket's accuracy, the traffic ticket will be sent to the vehicle owner's address," she explained.

If an offender does not pay within 60 days, their vehicle license plate will be suspended, said the researcher.