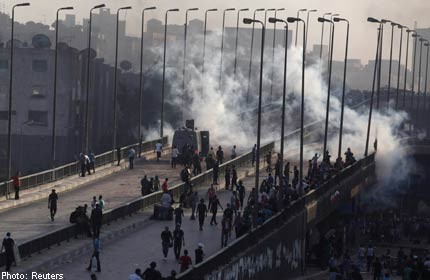 The government will arrange for Thais living in Egypt to be flown home if the situation there gets worse, Prime Minister Yingluck Shinawatra said yesterday.

Airlines had been informed of this decision, she said, and the Foreign Ministry had been tasked with closely monitoring the crisis.

"If the situation becomes violent, preparations have been made. The agencies will work jointly to bring Thai citizens home," she said.

"If people are worried, they can contact the Thai Embassy [in Cairo]. If anybody wants to return now, we will bring them back.

"So far, there have been no reports that Thais living in Egypt are asking for evacuation," the PM said.

A source at the Royal Thai Air Force said the authorities had been told to keep C-130 military aircraft on standby for a possible evacuation operation.

Meanwhile, the Thai Students Association in Cairo posted a message on Facebook yesterday saying that many Thai students in Egypt wanted help to leave immediately. The post said many students in Cairo were getting frustrated and needed urgent assistance, adding that they wanted the association to push the embassy to implement urgent evacuation measures.

"We would like to ask for sympathy from association members. We are not waiting for someone to be killed or injured. But as usual, the work needs to be done in steps and this matter requires funding. We know about Thai bureaucracy," the post said. "No matter how much the association and the embassy want the evacuation to take place, [but] nobody will be able to do anything until a higher authority approves it."

This post drew more comments from other association members, who complained about the purchase of clocks for the Parliament building, which cost Bt70,000 each. "I think they want to save the money to buy clocks," one comment said.

Egyptian officials said yesterday that 578 people were killed on Wednesday, the country's bloodiest day in decades. Many nations have issued travel warnings.

There are between 1,700 and 2,500 Thai students in Egypt, most of them Muslims at leading institutions such as Cairo's Al-Azhar University. There are also hundreds more Thai expatriates in the Egyptian capital and other cities either working for Thai-owned businesses or married to Egyptian citizens.

Foreign Minister Surapong Towichukchaikul said the protests in Egypt had not yet reached "Level 4", which is deemed the most dangerous and warrants evacuation.

"The Foreign Ministry is closely evaluating the situation. Be assured we can evacuate Thai nationals immediately if the situation reaches Level 4," he said, adding that most Thais live in Cairo.

Surapong, who is also deputy prime minister, said the embassy in Cairo had created a contingency plan in case of emergency. Egypt Air had also been contacted for possible evacuation of Thais to countries such as Turkey, Jordan, Greece or the United Arab Emirates, before they are flown to Thailand. There was also a plan for evacuation by sea and land, he said.

Concerned relatives can call the Department of Consular Affairs at 02-575-1147 or the Thai Embassy in Cairo at (+201) 01-940-1243 around the clock for latest updates on the situation, the minister said, adding that as of yesterday morning there had been no requests for evacuation.

Surapong also called for all parties involved in the Egyptian conflict to "exercise utmost restraint and refrain from further violence".

In a statement, he said: "We also call on the interim government of Egypt to ensure the safety and security of foreign nationals residing in Egypt.

"Thailand joins a large number of countries in condemning the excessive use of force, which could only lead to further violence and undermine efforts to return to the democratic process and achieve an inclusive national reconciliation in the interest of all Egyptian people, which we believe, at this point in time, should be the most urgent priority." Surapong asked the Egyptian charge d'affaires to help evacuate Thai nationals and handed his statement to be forwarded to the Egyptian government.