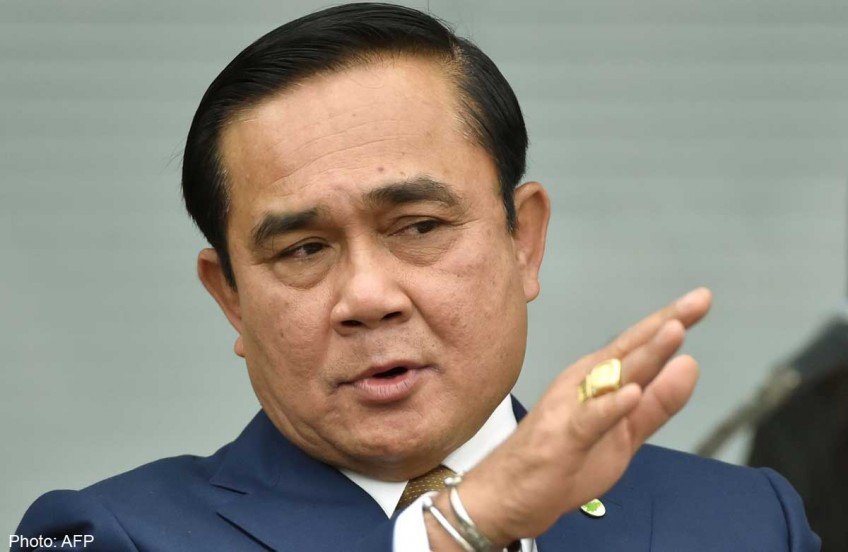 BANGKOK - Plainclothes police and military officers have visited the homes of at least 20 student protesters across Thailand in the past week, activists said, in the toughest response to dissent since the days after last year's coup that ushered in army rule.

Amid signs of simmering dissatisfaction with the leadership of Prime Minister Prayuth Chan-ocha, who seized power in May, the military junta appears to be running out of patience.

On Wednesday, Prayuth told a gathering of reporters he would"probably just execute" journalists who did "not report the truth". He may have meant the comments in jest, but according to journalists present, he delivered them without a smile.

In one case on Wednesday, plainclothes police entered the family home in the northern province of Chiang Mai of Witchapon Yanaso, a 22-year-old member of the "Democracy Protection Scholar" anti-coup group at Bangkok's Ramkhamhaeng University. "They told us to stop our grandson from taking part in political activities or he would have no future," said his grandmother, Kuan Yanaso, 61.

Two men wearing black, who did not identify themselves, returned to the house later that evening, Kuan added.

Weerachai Fendi, 20, another student activist whose home in Chonburi province, near Bangkok, was searched Wednesday, said the raids were creating fear among Thailand's small band of anti-army demonstrators. "We don't feel safe at all. As soon as we leave our halls of residence there are people following us," he told Reuters.

Of at least 20 homes visited by officials over the past week, six were searched by men in Royal Thai Army uniforms, the students told Reuters.

The searches are a "U-turn back to the days just after the 2014 coup" when hundreds of people were detained on military bases and then released, said Paul Chambers, director of research a the Institute of South East Asian Affairs affiliated with Chiang Mai University. "Prayuth is making a statement with these new, increased searches. That statement is that the military means business and will not put up with insurrection." Martial law has been in effect since the coup, banning political gatherings of more than five people.

Opponents of the junta have been tried in military courts, while there has also been a marked increase in the number of people charged under Thailand's strict laws against defaming the monarchy.

Junta spokesman Colonel Winthai Suvaree said visits to private homes were part of a national policy to stem public protests. "We call it creating understanding," Winthai told Reuters."In this period we don't want any political activities. Some police in certain districts have been assigned as public relations representatives." The searches come as the junta struggles to shore up Thailand's faltering economy, Southeast Asia's second-biggest.

Rubber farmers have threatened protests over low prices, and a range of critics have taken aim at what is perceived as the slow distribution of public funds.

Thailand's two largest political parties have also criticised efforts by a junta-backed assembly to draft a new constitution to replace the one thrown out in the May coup.

The parties fear the draft charter could weaken civilian authority, including by making the 200-member upper house Senate unelected. "It would go against the trend of the past 20 years where the road toward full democracy looked quite rosy despite its weaknesses," said Kasit Piromya, a former foreign minister and member of the conservative Democrat Party.