Thai king's coronation set for May

His Majesty King Maha Vajiralongkorn has issued a command to hold a three-day coronation ceremony in early May, the Royal Household Bureau announced yesterday.

The coronation is scheduled for May 4, when the King will make a public appearance before a gathering of the Royal Family, privy councillors, Cabinet members and senior public officials who will offer their good wishes, according to the announcement.

On the following day, a ceremony is scheduled to bestow the royal name on the newly crowned King, in line with the traditions governing the monarchy. On the same day, certain members of the Royal Family will be bestowed new titles to reflect their relationship with King Rama X.

On May 6, the King will hold a grand audience with members of the public and foreign diplomats in the Grand Palace.

"The King views this as a suitable time to hold the coronation in accordance with tradition and for national celebration and the joy of the people and the Kingdom," the bureau said in its announcement.

Read Also
Thai king granted full ownership of crown billions, which will be liable to taxation 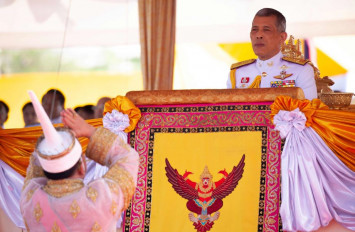 Television Pool of Thailand broadcasted the bureau's announcement to the nation around noon yesterday.

Following the passing of King Bhumibol on October 13, 2016, the president of the National Legislative Assembly invited then Crown Prince Vajiralongkorn to the throne, at the instruction of the Cabinet.

King Bhumibol was crowned in a traditional ceremony held at the Grand Palace. It was the first coronation ceremony of a Thai sovereign to rule under the constitutional monarchy system. May 5 was celebrated as Coronation Day with a public holiday until 2017.

His Majesty the King, 66, is the only son of the late King Bhumibol Adulyadej and Her Majesty Queen Sirikit. In 1972, at the age of 20, he was made crown prince by his father. A year's mourning following the passing of King Rama IX resulted in a postponement of the coronation ceremony, although the current monarch's reign officially began on October 13, 2016, upon his father's departure.

Also yesterday, Prime Minister General Prayut Chan-o-cha led a group of Cabinet members to write messages for the New Year in honour of His Majesty the King at the Grand Palace. The prime minister was accompanied by his wife, Associate Professor Naraporn.

High-ranking military commanders were also present there to write their good wishes for the King on the occasion of the New Year.