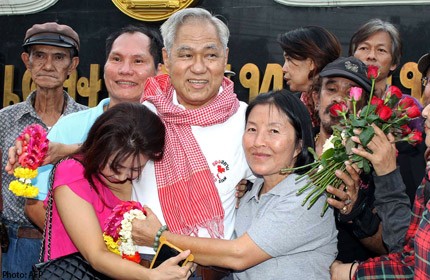 BANGKOK - A Thai political activist imprisoned under the kingdom's controversial laws against insulting the monarchy was released Friday after receiving a royal pardon.

Surachai Danwattananusorn (above centre), 71, was sentenced to a total of 12 years and six months in jail in 2012 on a series of charges for remarks made in speeches to supporters of his "Red Siam" group.

"I feel very happy and extremely appreciative for the mercy of the king," Surachai told AFP after his release.

"Without the royal pardon, I would have been there until I'm 80," added the activist, who served two years and seven months in the high-security Bangkok Remand Prison including pre-trial detention.

His wife Pranee, 56, said Surachai had experienced "many difficult incidents" while in prison.

"It was intense for him. A 70-year-old man shouldn't have to face things like that," she said.

Thai courts have in recent times handed down a series of tough sentences for insulting the monarchy, to the dismay of human rights campaigners. Surachai requested a pardon three times before he was released, his lawyer Karom Polpornklang said.

The royal family is an extremely sensitive subject in Thailand, but calls for reform of the strict lese majeste legislation have grown following several high-profile convictions.

Under the legislation, anyone convicted of insulting the Thai king, queen, heir or regent faces up to 15 years in prison on each count.

"It would be good if we can amend this law - to benefit not only the people but also the king," Surachai said.

"Recently we have seen the king give regular royal pardons. It shows that the king also sees some weaknesses in the law," he said.

In July a Thai man was released early from a 13-year sentence for posting online content deemed offensive to the monarchy after a royal pardon.

Critics say the lese majeste law has been politicised, noting that many of those charged are linked to the Red Shirt political movement, which is broadly loyal to fugitive former premier Thaksin Shinawatra.

He was ousted by royalist generals in a 2006 coup.

Surachai's Red Siam group is a hardcore offshoot of the Red Shirts.

Two months of mass anti-government protests by the Red Shirts in Bangkok in 2010 descended into the kingdom's worst political violence in decades, with more than 90 people killed in a military crackdown.