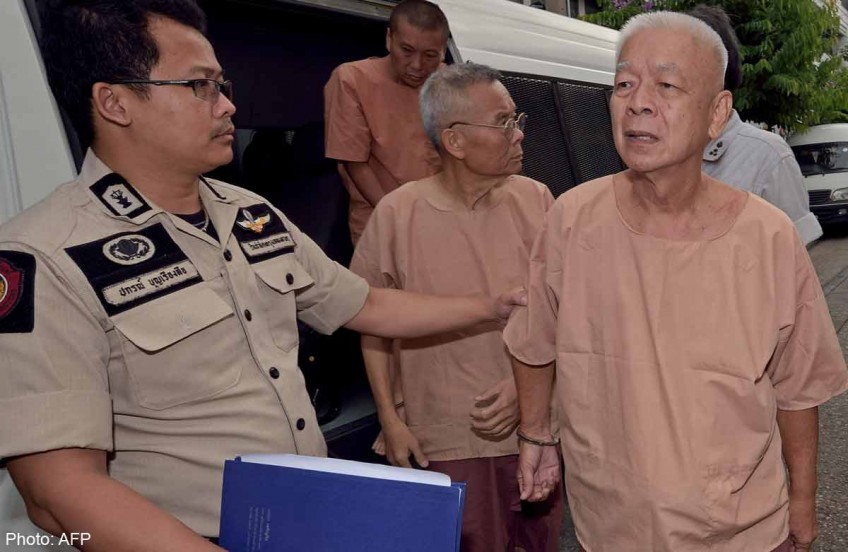 Ophas Chansuksei ,67, (R) is escorted by prison guards, jailed by a military court for scrawling graffiti in a shopping mall toilet critical of the country's junta leaders and its revered king.

BANGKOK - A Thai military court sentenced a man to one-and-a-half years in prison on Friday for writing graffiti insulting Thailand's king, the latest in a mounting number of lese-majeste cases following a May coup.

Thailand has been under martial law since the coup. The military government has said it would pursue all royal insult cases.

King Bhumibol Adulyadej, 87, the world's longest reigning monarch, is revered by many in the country as a demi-god and shielded by royal defamation laws which makes it a crime to defame, insult or threaten the king, queen or heir to the throne or regent.

Opas Charnsuksai, 67, was arrested in October and charged with lese-majeste for writing graffiti thought to be insulting to the king inside toilet stalls at a Bangkok shopping mall.

Thailand's lese-majeste law is the world's strictest and carries a maximum sentence of 15 years in prison.

Since the coup, the number of lese-majeste cases have skyrocketed under the watch of Prime Minister Prayuth Chan-ocha, a staunch royalist who has repeatedly vowed to root out critics of the monarchy.

The ruling junta, or National Council for Peace and Order, decreed after the coup that all lese-majeste and national security cases would be tried in military courts.