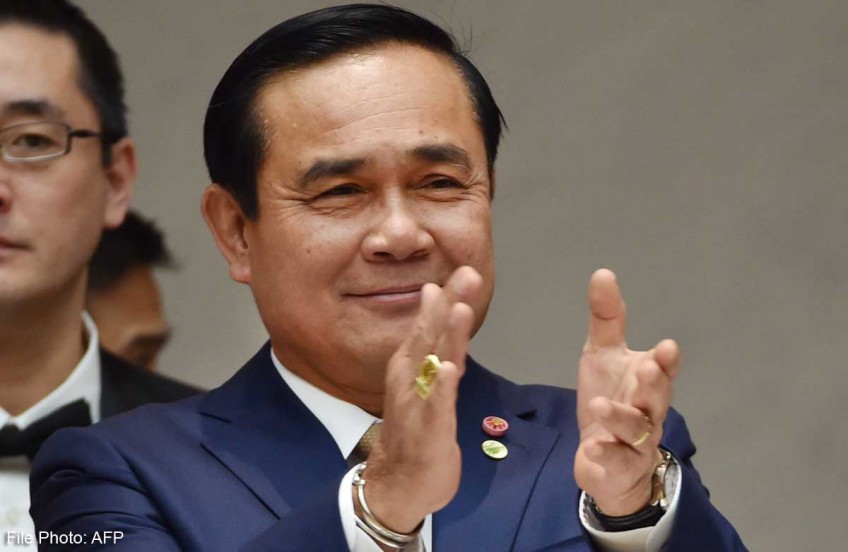 THAILAND - Prime Minister General Prayut Chan-o-cha said yesterday he was thinking of replacing martial law with other laws including giving himself "absolute power".

"I have been thinking [that] for a long time," Prayut pointed at his head and replied when asked whether the Cabinet meeting in Prachuab Kiri Khan's Hua Hin today would consider the replacement of martial law with other laws.

A source said that Prayut and other members of the National Council for Peace and Order (NCPO), of which he is the head, were thinking of replacing martial law with either Emergency decree, the Internal Security Act, including Article 44 of the Provisional Constitution, which gives the NCPO head "absolute power".

Asked if Article 44 was an option, he smiled and said: "I'm thinking. We will try our best to make officials comfortable when doing their duties."

He said the measure in the new law would be equal to martial law so that the people will know that the NCPO did not fully enforce it.

Prayut appeared to be in a good mood after returning from a trip to Brunei. Before he left Thailand on Wednesday, he appeared tense and angry with the media.

Article 44 gives the NCPO leader "absolute power" to issue any order "for the sake of reforms in any field, the promotion of unity and harmony amongst the people of the nation, or the prevention, abatement or suppression of any act detrimental to national order or security, royal throne, national economy or public administration, whether the act occurs inside or outside the Kingdom".

Orders that are so issued are all deemed "lawful, constitutional and final".

Deputy Prime Minister Prawit Wongsuwan, who oversees security affairs, admitted that the legal team of the NCPO was drafting a new law to replace martial law.

He said the drafting would include writing a new law and adjusting the current security law.

"We are trying to reduce pressure. The United Nations asked us to [find a new law]. I didn't set the deadline [for the completion of the draft] because it will not trouble anyone. We now enforce only summons, arrests and searches [of the martial law]," he said.

He denied the Cabinet meeting today would consider the matter.

He insisted that security law was needed to replace martial law because those who have ill intent still exist.

Experts argue that the military court is not meant for civilians as defendants have no right to appeal. What's more, judges are not totally independent of the military chain of command. As for martial law, critics have denounced the use of martial law to detain hundreds without charge since the coup. The law permits detention without charge for up to seven days. Some allegations of torture have been made by detainees while under military custody, at times, in secret locations where detainees were held incommunicado.

International organisations such as the UN and NGOs like Human Rights Watch and Amnesty International have criticised both the use of martial law and use of the military court on civilians. As the situation drags on and more people are being put through military court, it's expected that the resistance and condemnation will continue.