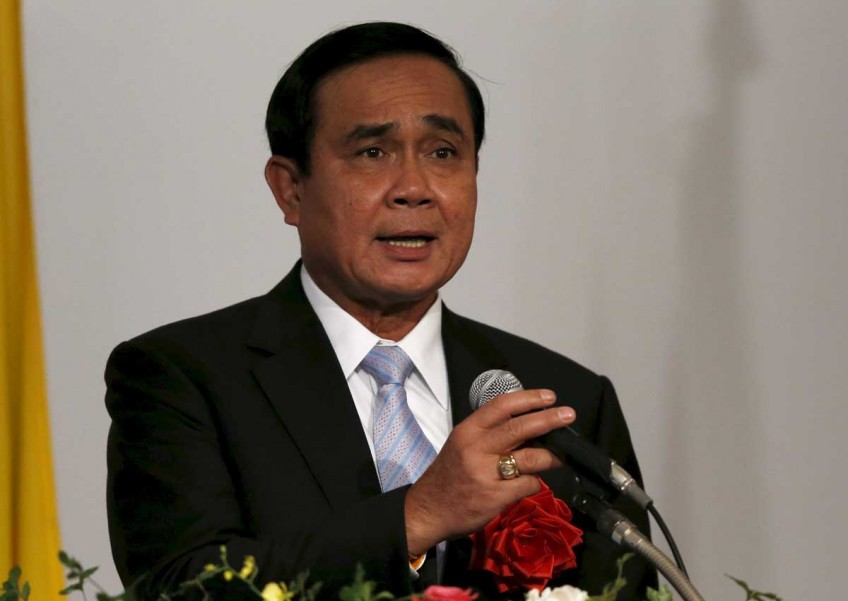 "We have to look at what happened in the past," Prayut told an economic forum at Muang Thong Thani, "so we can develop full, conflict-free democracy and move the country forward."

Prayut has always maintained that the military coup in May last year was intended to end a political squabble between political groups and begin reforms to pave the way for democracy and reconciliation.

While many observers inside and outside the country have called for elections soon to restore democracy, the rejection of the draft constitution last month effectively delayed the election.

The country is already democratic, Prayut insisted, so there is no need to rush.

"[You] should rather think of how to make the country peaceful and secure," Prayut suggested. "I wish to build strength and democracy in this country, so [you] should spare me some time."

Speaking about his fight against corruption, the premier said has ordered the setting up of a legal mechanism to cope with corrupt individuals, whether offering bribes or receiving them.

"If nobody offers bribes then nobody can receive them," Prayut explained, "so they also need to be prosecuted.

"Our national anthem clearly states that Thailand is a nation state (Pra Cha Rat) not populist (Pra Cha Ni Yom)," he said, in an apparent attempt to defend his economic policy, which has been widely criticised for its similarities to the populist agenda of fugitive former prime minister Thaksin Shinawatra.

'Communities must be strengthened'

Prayut said local communities must be strengthened, especially in terms of agriculture. Crop rotation practices must be adopted, together with market support from the government, he said.

"We have to move the country forward by starting with local communities, so we can create security, prosperity and sustainability to the country," he said.

Meanwhile, Deputy Prime Minister Somkid Jatusripitak defended his economic policy of strengthening the grassroots economy. He refuted criticism from an analyst that the policy would not help boost the country's GDP (growth domestic product).

Speaking at the same forum as Prayut, he said: "The analyst said this policy will not help improve the economy but investment in the country's basic infrastructure will help prop up GDP. You reporters please tell the analyst to do more homework to acquire more knowledge about the conditions of Thai society.''

The seminar, entitled "Strategies for the public and private sector teaming up to boost grassroots economy'', was aimed at getting concerned agencies to think of ways to get the country out of a black hole in six aspects: politics, economics, social, environment, morality and human development.

Somkid said neither he nor Prayut had much time to work and they had never considered furthering their own political paths.

"Please trust me that if I still have the energy, I will help bring about the development of grassroots economy, without any thought of my own political future. I can envision my future and I see myself happily playing with my grandchildren in a united and peaceful society,'' he said.

Dr Prawase Wasi, chairman of the Right Livelihood Foundation, said no single agency could achieve the goals of the seminar.

"We need co-operation from the state, the private [sector] and the people to achieve the objectives, which we call "triangle moves the country forward".