A Chinese man was escorted off a plane by Thai police on Wednesday after opening an emergency exit as his flight bound for central China was preparing to take off from Bangkok, according to a Chinese newspaper.

Thai Lion Air flight SL940 was scheduled to leave Don Mueang Airport for Wuhan, the capital of Hubei province, at 6.55pm but the incident caused its take-off to be delayed until 8.47pm, according to Flightview.com.

According to a witness, the man reached for the handle of the emergency exit and pulled it downwards, Chutian Metropolis Daily reported on Friday.

Shocked passengers shouted at him and a member of the cabin crew ran to the scene, the report said.

The witness was quoted as saying that the man seemed frightened and kept apologising to the flight attendant, saying he did not know he was not supposed to open the door.

Another passenger was quoted as saying that police officers boarded the aircraft and took the man and his luggage off. 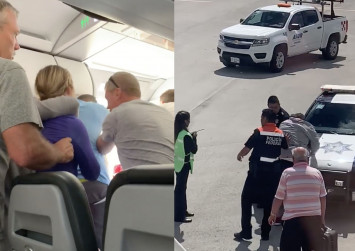 Another said "it was lucky the plane had not taken off because if the door was opened while the plane was in mid-air, everybody would have been in danger".

The report did not identify the man or say what happened to him after he was taken off the flight. Thai Lion Air declined to comment on the matter.

There have been numerous reports in recent years of Chinese airline passengers behaving inappropriately, such as opening emergency exits and throwing coins into aircraft engines for good luck.

In April, a man from central China was detained for 10 days after tossing coins onto the ground beside the plane he was boarding in Wuhan. He told police he had been encouraged to make the "good luck" gesture by his mother-in-law.

This article was first published on South China Morning Post