Police have applied for arrest warrants against six more suspects involved in the abduction of a 39-year-old Chinese woman at Suvarnabhumi Airport on the night of May 6 for a Bt15 million ransom. 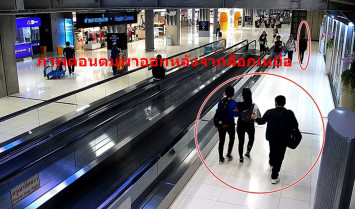 Meanwhile Immigration Police officer Pol Senior Sgt-Major Nipon Phuttharaksa, who is accused of being an accomplice to the kidnapping, has been transferred to another agency pending a probe that could lead to his dismissal without pension plus legal action.

Surachate revealed that police suspected Nipon had been threatening and extorting money from foreign visitors, but only got solid evidence when he was caught on camera helping the other suspects to abduct Jincai Chen at the airport and take her away in a van. With such clear evidence of wrongdoing, it was likely that Nipon would be dismissed from the civil service, he said.

The victim was abducted by five people upon her arrival from Hong Kong. She was safely released on the roadside in Bang Na district 14 days later. Her Korean husband had paid 1.9 million yuan (S$399,637) in ransom money to the gang, but when they failed to release Chen he filed a police complaint on May 18 resulting in the investigation.