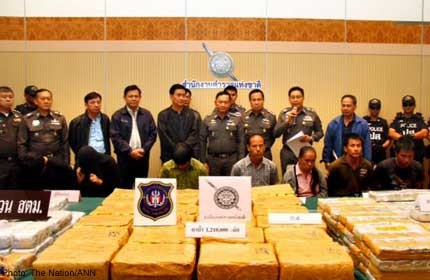 THAILAND- Authorities yesterday seized some 980,000 methamphetamine pills worth almost Bt190 million stashed in a truck thought to be heading to Bangkok from northern Thailand, police said.

They found packs of the drug, known as ya ba, hidden in the roof of a pick-up truck.

"It is quite a big haul - another big haul - almost a million tablets," said deputy provincial police chief Virat Sumanaphan, estimating the value of the drugs in the capital would be up to Bt200 baht per pill.

Three men and a woman, all from neighbouring Chiang Mai province, were arrested on suspicion of drug smuggling.

The frontier Golden Triangle region, where the remote edges of Thailand, Myanmar and Laos meet, has long been a drug trafficking hub, with surging methamphetamine smuggling now adding to the traditional illicit opium trade.

It is estimated that at least 1.4 billion ya ba tablets - with an estimated street value of US$8.5 billion (Bt265 billion) - are being produced each year in the region, according to the United Nations Office on Drugs and Crime.

The drug is mostly made in isolated mobile laboratories hidden in the forests of Shan state in Myanmar, which is also still the second-largest global source of opium after Afghanistan.