Thailand's King Maha Vajiralongkorn and Queen Suthida greet their royalists as they leave a religious ceremony to commemorate the death of King Chulalongkorn, known as King Rama V, at The Grand Palace in Bangkok, Thailand, Oct 23, 2020.

Left unchecked, rampant criticism of the Thai king by pro-democracy protesters will become like “ringworm”, according to arch-royalist Nopadol Prompasit. “It will just keep spreading.”

The 56-year-old said he sees it as his duty to apply “the ointment” by reporting protesters under Section 112 of Thailand’s criminal code – the infamous lèse-majesté law that outlaws criticism of the royal family and carries punishments of up to 15 years in jail.

In recent weeks, Nopadol, who founded the Thailand Help Centre for Cyberbullying Victims, has been scouring the internet, following up on messages concerning videos or Facebook posts that allegedly show those who have disrespected the country’s apex institution.

Since King Maha Vajiralongkorn ascended to the throne in 2016 following the death of his father, the much revered Bhumibol Adulyadej, the offence of royal defamation had largely been dormant.

But as open attacks have grown on the king’s wealth and personal conduct amid a youth-led movement that seeks the removal of Prime Minister Prayuth Chan-ocha – as well as constitutional changes and reforms to the monarchy – at least a dozen protest leaders have received police summons: the first step towards being formally charged under Section 112.

Among them was Jatupat Boonpattararaksa, also known as Pai Dao Din, who said he had now received his second summons since Vajiralongkorn came to power – the first, in 2017, saw him jailed for more than two years after he shared an unfavourable article about the new king online.

Anyone can file a complaint under the law and police treat allegations with extreme seriousness – opening the door for royalists on a self-appointed quest to protect the palace.

“Criminals always leave evidence,” said the bespectacled Nopadol. “In 90 per cent of the complaints we have filed we barely have to do anything … There are screen grabs, links to use as evidence.”

In recent days, there has been plenty to keep him busy. Graffiti, satirical placards criticising the monarchy as a burden on Thailand’s finances, and speeches decrying the king have been a frequent feature of protests, sending shock waves through social media.

Protesters are also calling for the immensely rich royals to extricate themselves from politics and remain strictly bound by the constitution. But that has deeply divided a society in which conservatives still hold much reverence for the monarchy.

For arch-royalists – known as “yellow shirts” for the colours they wear – calls for greater scrutiny of how the king operates are unacceptable.

“It’s a cyberwar and we’re like the Ronin warriors,” Nopadol said, in reference to the samurai of feudal Japan who had no lords or masters. “We fight on our own, not by anyone’s order because we have the same goal – to protect our beloved institution.”

Critics say Vajiralongkorn has edged towards absolutism in his reign – pointing to how he took personal control of the crown’s multibillion-dollar assets, appointed elite army units that are under his direct command, and hand-picked an inner circle of highly connected army and police generals.

Last Wednesday, demonstrators massed at the Siam Commercial Bank, in which the king has a 23 per cent stake worth around US$2.3 billion (S$3 billion), demanding the crown’s wealth be returned to the people.

In response the king has stepped up a public relations campaign, remaining in Thailand as the political crisis deepened and taking to the streets – always with Queen Suthida by his side – to meet ‘yellow shirt’ supporters on frequent walkabouts.

As banners calling for palace wealth to be “returned to the people” flew outside the bank headquarters last week, the king met an adoring crowd on the other side of Bangkok.

They knelt in his presence and chanted “long live the king” as the monarch spoke to hardcore royalist organiser Warong Dechgitvigrom, who later relayed the king’s message on Facebook.

“We must help people to understand what is wrong, what is bad and what is not true,” he wrote to his more than 100,000 followers.

'We love them all the same'

Vajiralongkorn is yet to directly address the pro-democracy protesters, but in an unprecedented comment to a foreign TV reporter earlier this month, he insisted “we love them all the same” when asked if he had a message for the demonstrators.

His words quickly became a protest meme, portrayed as hollow without any follow-up offer of communication with his critics, who are mainly from a younger, less deferential generation.

Now, the use of Section 112 has added fuel to the fire, galvanising protesters who have ramped up demonstrations over the past few days, with more mass action expected to continue next week.

“Does the government honestly think that the law is going to stop people?” asked 34-year-old Oh, who was protesting at Bangkok’s Lat Phrao Intersection. “People are fed up and they’re speaking up now.”

Passaravalee Tanakitvibulpon, one of the protest leaders to receive a police summons under Section 112, said she had been preparing for such an eventuality. 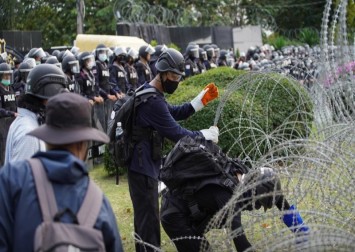 “But it shows the government is putting the monarchy directly as the enemy of the people. The fight of the people is more valuable than this law,” she said.

Thailand’s dusting off of its lèse-majesté law has also drawn criticism internationally – barrister Amal Clooney of The Clooney Foundation for Justice in a statement last week called for all charges to be dropped against protest leaders.

For demonstrators, the country’s history of bloody crackdowns on pro-democracy movements and the expectation of more Section 112 charges have done little to dampen their enthusiasm.

Protesters have instead been wielding pizza boxes – in a cheeky reference to the law derived from a local ‘1112’ pizza hotline – scribbled with explainers as to why they should be free to debate the monarchy.

“This law won’t stop the protest movement,” said Teera Suteevarangkul, a legal scholar from Bangkok’s Thammasat University. “Their desire for reform is far more powerful than the law.”