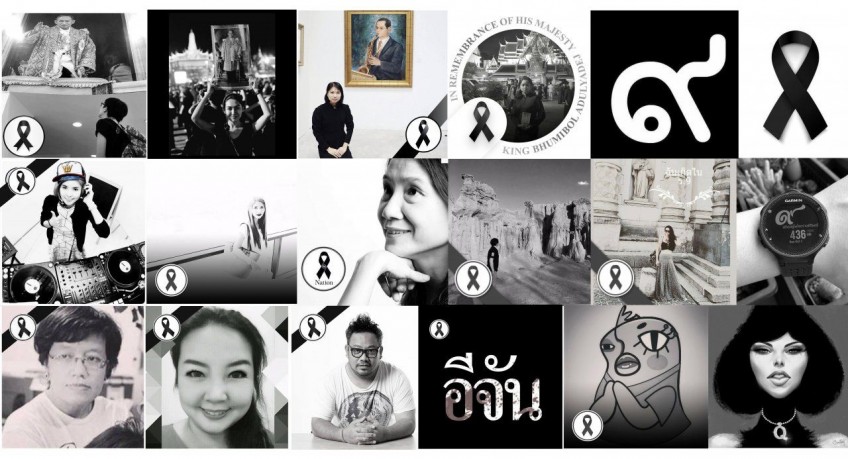 Social media tones down in memory of King Rama IX Marisa Chimprabha With just a few weeks to go before the Royal funeral of HM King Bhumibol Adulyadej, many Thai users of social networks, particularly Facebook, have converted their profile photos to black and white in honour of their beloved King, who passed away on October 13 last year at the age of 89.

Some users have replaced their profile and cover pictures with ones that look more serious or sombre to express their sorrow. They have done this en masse, not because of any order from above but because it is a way to express their sadness.

Some users have gone further, displaying just a black background on their Facebook profiles, without photos. Others have attached a black ribbon to their profile photo, as a symbol of one of the saddest periods in Thai history.

The changes have been made not just by private citizens but by government authorities and private companies, many of whom have converted their websites and Facebook pages to black and white.

Others have posted photos of the late King engaged in activities throughout the country. Thai social network users have also toned down their posts and comments, avoiding heated topics and colourful language during this period.

The online changes reflect the fact that people from all walks of life have joined the movement to express their condolences and show respect to the late King.

Many of them are from a new generation who may not have had a chance to see King Rama IX in person, but have learnt about his hard work for all Thai people throughout his 70 years on the throne.

His funeral will be held at Sanam Luang, where the Royal Crematorium is situated, from October 25-29.

The Royal Cremation will be on October 26, when hundreds of thousands of mourners are expected to attend.