Police have not yet interrogated a 17-year-old girl who threw her baby out of her apartment window on Sunday.

The mother's name is being withheld because she is a minor. The incident took place in Songkhla's Sadao district on Christmas Eve.

As of press time on Tuesday, it was unclear whether the female baby had died as a stillborn or because of the fall from the third floor of the apartment building. Songkhla's social development and human security chief Supachai Limjuthamas said on Tuesday that his office would provide counseling to the teenager.

"She can talk to social workers and psychologists," he said. "She can pour her heart out as to why she did this. What problems does she have and what help does she need?" Supachai said the teenager might have been so immature that she did not understand the severity of her action. 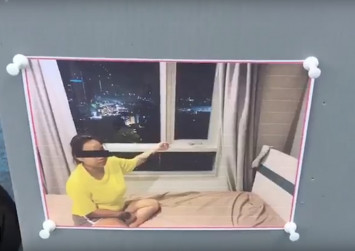 According to a friend of the teenager, she had been impregnated by her Malaysian boyfriend, who subsequently broke up with her.

She had been staying at her friend's apartment as she was already heavily pregnant. On Sunday the friend returned home, found the teenager bleeding and called an ambulance.

The teenager said she had fallen down and had a miscarriage.

Officials later found the body of a female baby near the apartment. An unnamed source said the teenager's parents were with her and expressing concern that she might develop stress or sneak out of the hospital.

Police are treating the girl as a minor and have decided not to interrogate her until she is emotionally ready.