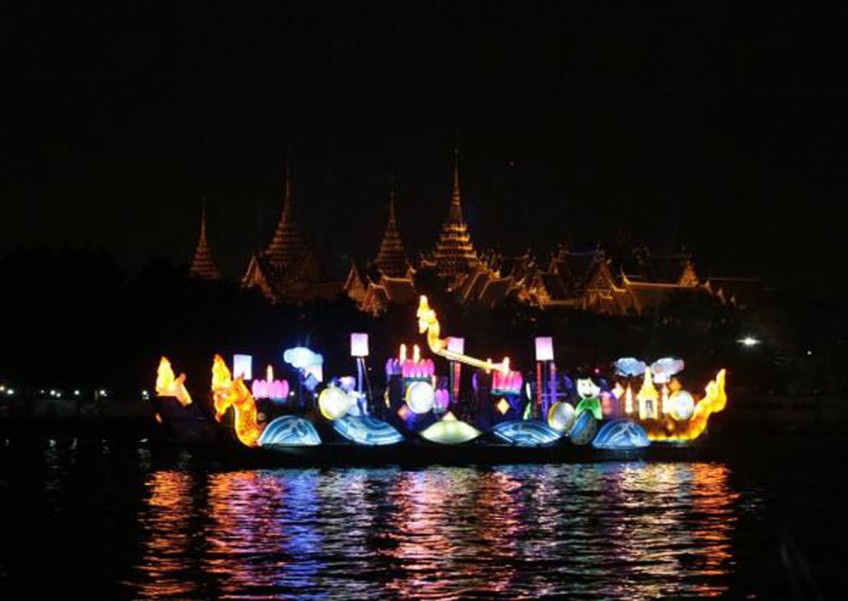 THE BANGKOK Metropolitan Administration (BMA) has warned that anybody selling or releasing airborne lanterns in key venues with tall and large buildings from 6pm today until 5am tomorrow would face up to three months in jail and/or Bt6,000 (S$236) in fines.

The venues included palaces, temples, historic sites, event-organising places and government offices. Warning signs have also been posted at 32 piers and pontoons along the Chao Phraya River and 21 along canals prohibiting their use during the Loy Krathong festival. They include the Wang Lang (Siriraj) Pier, Suraosaikongdin School Pier, Wat Bukkalo Pier, Chongnonsee Pier and Wat Chatkaewchongkolnee Pier.

As for those that can be used, the city has also posted signs notifying the public about the pier's load limit, which is usually up to 60 persons.

The ban on floating lanterns was announced last week by deputy Bangkok governor Pol Maj-General Atsawin Kwanmuang, based on the Disaster Prevention and Mitigation Act 2007's Sections 21, 22, 32 and 37.

Up North, Chiang Mai International Airport director Group Captain Wisoot Chantana yesterday affirmed that a total of 84 flights had been cancelled and another 40 rescheduled from yesterday until tomorrow as a measure to avoid the floating lanterns.

Wisoot said this encouraged visitors to arrive earlier and stay longer in the province, hence generating more spending. He said the number of arrivals in the two to three days before the festival had risen to 17,000 per day from the usual 12,000. He said visitors had been informed about flight cancellations or rescheduling, so they could plan accordingly.

Meanwhile, local craftsmen in Chiang Mai dismissed as untrue a viral post circulating in social media about floating lanterns being attached to small cooking-gas cylinders to keep them afloat longer and rise higher.

Nikorn Wongwiraj, owner of the Loongthong Khomloy shop, said such an invention was not likely to rise as high as 6,000 metres. He said the lanterns were made of paper, wire and bamboo so they are light enough to float and could not possibly carry a cylinder.

He explained that if there were such lanterns in reality, they would have to be rather enormous with a 10-metre radius to carry the weight, hence it would be witnessed by far more people if it were ever to take to the skies.