Thailand growers have created a version of durian that lacks the pungent odour that makes the fruit famous.

The durian, known for its custard texture and pungent smell, is both reviled and celebrated the world over.

But those who cannot stand the stinging aroma have a reason to cheer as a "non-stinky" variety of the thorny fruit was introduced last week in Thailand.

Growers claimed the offshoot, which was showcased at a durian festival in Pak Chong district, is sweet and dry with soft flesh — but most importantly — lacks the strong smell.

Durian connoisseurs, including Thai beauty queens, savoured the new variant at the event co-hosted by the Tourism Authority of Thailand.

The Pak Chong-Khao Yai variety was approved as a GI product by the Department of Intellectual Property last year. A GI is a label applied to products which correspond to a specific geographical location and have characteristics or qualities attributable to that particular place — think Scotch whisky, or certain regional cheeses.

China's imports of fresh durians quadrupled to US$2.3 billion in 2020 from 2017, according to United Nations data, as they overtook cherries to become the country's number one fruit import by value in 2019.

While the spiky fruit is sought after in Southeast Asia and China, it has also attracted its share of controversies.

In 2018, an Indonesian flight was grounded for an hour after travellers kicked up a stink about what was in the hold — dozens of sacks of durian.

Read Also
3 places for durian buffets, including free-flow D24 at Jurong Point for $38 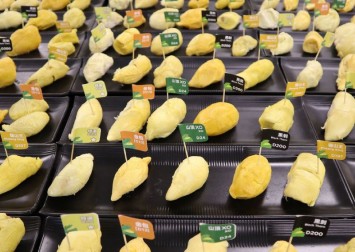 Passengers disembarked the Sriwijaya Air flight, bound for Jakarta from Bengkulu on Sumatra Island, following complaints the smell in the cabin made flying unbearable.

The plane took off after the aircrew unloaded the fruit, whose smell has been likened to rotten onions, turpentine and dirty gym socks.

In 2019, a piece of fruit forced the evacuation of students and staff from a university in Australia after rescue teams responded to calls of "a strong smell of gas" inside the University of Canberra library.

The library staff later revealed the source of the odour — a durian — that was left near an air vent on the facility's second level and eventually removed in a sealed bag.

The fruit is banned from public transport and hotel rooms in some Asian cities.