Thailand invokes ISA ahead of visit by Chinese premier 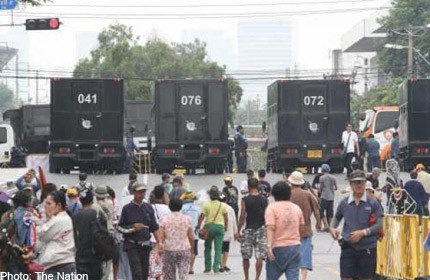 The People's Army to Overthrow the Thaksin Regime shifted their demonstration to Government House on Monday after rallying at Lumpini Park for over two months.

The security guard around the seat of government has been beefed up to more than 1,000 police to keep the peace.

Deputy Prime Minister Pracha Promnok said he had informed Prime Minister Yingluck Shinawatra, who was attending the ASEAN Summit in Brunei, of the invocation of the decree.

The government took action after talks failed to persuade protesters to evacuate their rally site ahead of Chinese Premier Li Keqiang's visit tomorrow.

Interior Minister Charupong Ruangsuwan said the government had to enforce the ISA because Thailand was hosting a foreign dignitary but a group of people were trying to disgrace the administration.

The protest was expected to escalate into a mass rally because the participants were determined to topple the administration and disrupt the work of Parliament, he said.

"They chose this timing because we are receiving a state guest. They intend to embarrass the government," he said.

"Parliament is also deliberating a bill to amend Article 190 of the Constitution and several other important bills. We will not allow them to disrupt the work."

Paradorn Pattanathabutr, secretary-general of the National Security Council, admitted that the decision had something to do with the warning by former prime minister Thaksin Shinawatra that there would be a conspiracy to overthrow the government this month.

Security agencies had assessed the situation and believed that the government opponents would prolong their demonstrations, he said.

Suriyasai Katasila, coordinator of the Green Politics Group, said the government enforced the ISA even though the protesters were few in number because of Thaksin's belief that efforts would be stepped up to oust the government.

The government would probably extend the ISA until the end of the month to prevent other groups from joining the protest, he said.

Senator Paibul Nititawan said the government should not have resorted to the ISA because the demonstrators were exercising their constitutional right to gather peacefully. He and other senators might file a petition against the Cabinet with the Constitutional Court, he said.

Sunisa Lertpakawat, deputy government spokeswoman, said the government had to implement the ISA even though the number of protesters was not high because it feared that they would try to break into government offices.

"Security agencies have assessed the past behaviour of the protesters and decided that there must be a measure |to prevent them from intruding into important places, such as Government House, Parliament and the Royal Palace," she said.

Chaiyan Chaiyaporn, a political-science lecturer at Chulalongkorn University, said the government was too paranoid and activating the ISA while the number of protesters was little would cause the special law to lose efficiency in containing uprisings.

The government felt the ISA was needed because it feared that more protesters would join the rally over the weekend and many more might show up on October 14, which marks the 40th anniversary of the student uprising, he said.