A police captain, who was dubbed “Thailand’s Bruce Willis” because he looked like the Hollywood star, killed himself after an apparent drunken argument days earlier with his wife in an apartment at the police flats in Udon Thani’s Meuang district.

Neighbours called the police yesterday (July 12) after a rotten smell emerged from the apartment.

Officers had to break into the apartment on the ground floor of the four-storey building.

They found the body of Pol Captain Chalongrat Waikaew on the floor with dried blood at his head.

Next to his body was a 9mm Glock handgun with six bullets in the magazine and a bullet casing on the floor.

Forensic staff reported that the deceased had a bullet wound to his right temple and he had been dead for five days.

Pipat Waikaew, 49, the deceased’s wife, reportedly told the police that she and Chalongrat had a fight on July 5 when he was drunk.

He pulled out a gun to threaten her. She therefore left the apartment with her two children, aged 13 and 10, and rented a room elsewhere. She had not contacted him since. 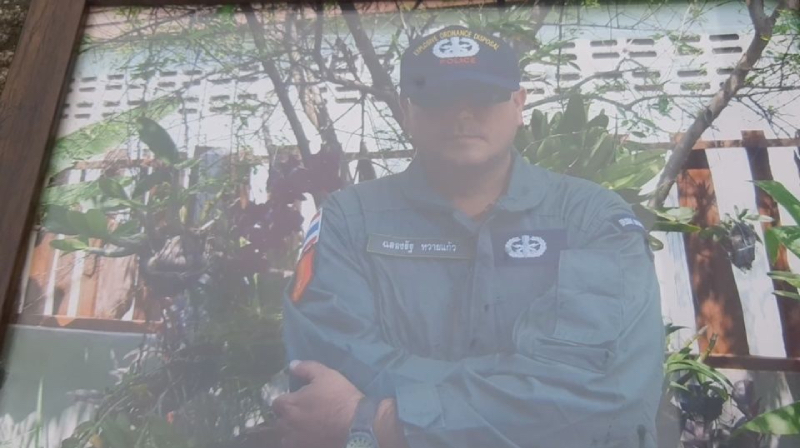 Chalongrat was serving as a deputy chief of the crime suppression unit at Udon Thani’s Phibulrak Station and was well known among the press while he worked in Udon Thani’s Explosive Ordnance Disposal unit.

He was dubbed “Thailand’s Bruce Willis” because he looked like the Hollywood star.

Chalongrat’s body was taken to Udon Thani Hospital for a detailed autopsy.