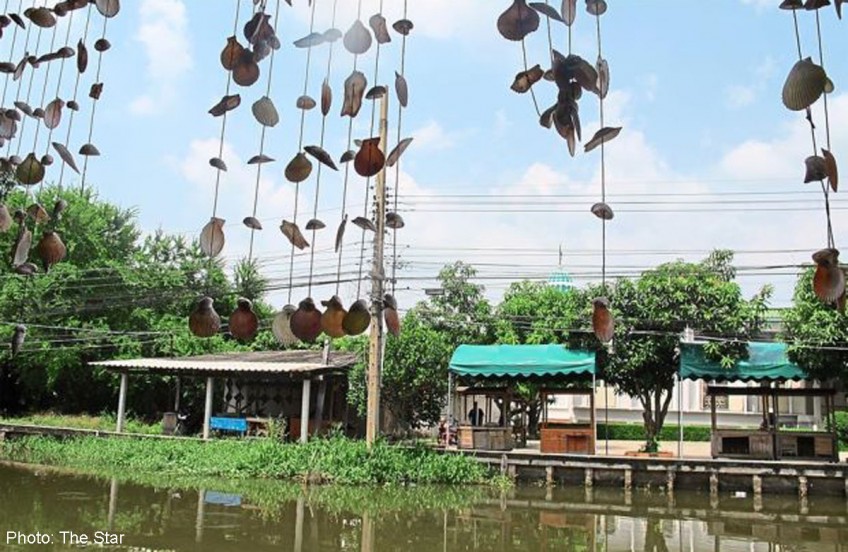 Bangkok is a city that is never short of wonderful markets, or talad as they are known to the locals. A visit to the Amphawa floating market is a must for any first-time visitor to Bangkok, but fun-seekers looking for a bit of adventure off the beaten track should head to the 100-year-old Khlong Suan Market (Talad Khlong Suan Roi Pi).

Located about 25km from Suvarnabhumi Airport, Khlong Suan can be reached by buses plying the Bangkok-Bang Khla route from the Ekkamai BTS station.

Since my friends and I started the journey early in the morning, and had a lot of time to spare, we took the train from Phetchaburi station to Chachoengsao.

It was quite a nostalgic and romantic train ride that gave us a glimpse of the suburbs of Bangkok. As scenes of Bangkok's public housing faded behind us, we were greeted by beautiful paddy fields along the railway tracks.

After the 90-minute train ride, we disembarked at Chachoengsao station before hitching a van ride to Khlong Suan.

Named after a canal dug from Bangkok to Bang Pakong River, Khlong Suan market sprung up along the canal's bank like many early establishments.

Conveniently located between Chachoengsao and Samut Prakan, it was a central meeting point for traders and farmers from central and eastern Thailand during its heady days.

While modern commerce has gradually replaced its role, locals still throng the market for fresh produce, groceries and food.

It is usually a hive of activity on weekends when day-trippers make their way there to experience shopping in a market from a bygone era.

The trip to Khlong Suan will be an especially nostalgic one for many South-East Asians who grew up in the 1980s and early 1990s.

I was delighted to see toys from my childhood being sold at many of the shops there. One must know that children used to play with toys such as slingshots before the advent of the iPad.

Other vintage items sold include kerosene lamps, transistor radios, steam irons and typewriters. I silently made a note that if I ever have a hipster cafe of my own, I should go back there to get the furniture and decor.

Many of the shops in Khlong Suan were owned by first-generation Chinese-Thais whose parents had emigrated from Fujian province. We met novelty store owner Tan Yee Chew who was overjoyed to have a lengthy chat with us in Mandarin.

"It's been a long time since I spoke Mandarin with anyone, since my schooling days in China," said the Thai-born octogenarian who has been selling brass items in his store for more than 50 years.

Just like a living museum that is frozen in time, Khlong Suan still has a traditional barbershop frequented by men going there for a shave.

A walk along the charming wooden decks brought many other surprises, too. There is a shop selling items that have long become obsolete - cigarette packages sans the gory images of smoking-related symptoms, early models of mobile phones that are the size of a brick, and many vinyl records.

At a sidewalk, we saw a man coating duck eggs with a mixture of black clay and salt. That was the traditional way of making salted duck eggs, unlike the modern method of soaking the eggs in brine.

He told us that the eggs have to be salted for 20 days, and beckoned us to have a taste. The freshly made salted eggs were delicious - the egg white is not overly salty and the yolk is tender. Imagine having that with a bowl of congee!

What's an excursion in Thailand without a feast? Khlong Suan has plenty to offer when it comes to delicious Thai and Chinese cuisines.

As a prelude of a great gastronomy journey ahead, stalls set up at the entrance of the market sell a myriad of mouth-watering desserts packed with colours and flavours.

It was so easy to get carried away when buying the desserts and snacks because we wanted to try everything. For lunch, we ate at a store serving delicious crab meat fried rice and crab meat omelette.

A must-visit is Mr Lee's coffee shop. Unfortunately, Lee, who gained fame for his Oliang coffee (Thai iced coffee), passed away last year; his business is now run by his daughter.

We stopped by the coffee shop and sampled the famous coffee. Suffice it to say, the coffee is still good and we plan to go back for more.