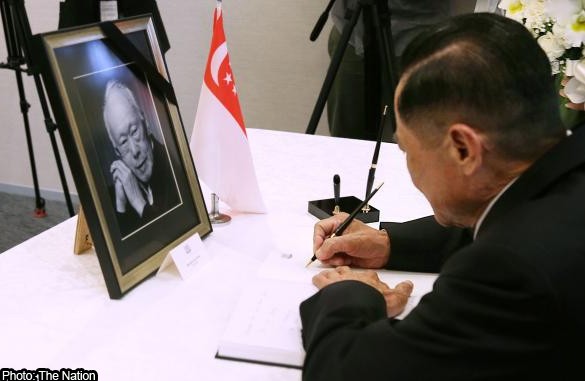 THEIR MAJESTIES the King and Queen yesterday sent their condolences on the passing of Singapore's former premier Lee Kuan Yew on Monday. The Office of His Majesty's Principal Secretary conveyed the royal message to Singapore via its embassy in Bangkok.

In their message to Singapore's Prime Minister Lee Hsien Loong, their Majesties said that they learned with deep sorrow of the death of Lee Kuan Yew, former prime minister of Singapore.

"We wish to extend to Your Excellency and members of the bereaved family as well as the people of the Republic of Singapore our sincere sympathy and heartfelt condolences for the irreparable loss of the founder of the republic whose sacrifice and dedication led to the birth and prosperity of the nation," read the message.

The present prime minister is a son of the deceased Lee.

Meanwhile, Prime Minister General Prayut Chan-o-cha also expressed his condolences on the death of Lee senior. In his message to his Singaporean counterpart, Prayut expressed "deep sorrow at the passing away of your father.

"On behalf of the Royal Thai Government and the people of the Kingdom of Thailand, I wish to sincerely express my profound condolences to you and your family, and through you to the people of Singapore for this irreplaceable loss."

Lee Kuan Yew will be respectably remembered for his exemplary statesmanship, his resoluteness, sacrifice and prosperous nation, along with his significant contribution to building close ties of friendship between Thailand and Singapore with the establishment of our diplomatic relations 50 years ago, read Prayut's statement.

Prayut will travel to Singapore on March 29 to attend the state funeral of Lee senior at the invitation of the Singaporean government.

He, however, denied a rumour that he would also meet self-exiled former premier Thaksin Shinawatra who reportedly would visit Singapore on March 28, saying he has nothing to do with Thaksin.

In an apparent reference to Thaksin, Sansern said somebody might attend the funeral in a personal capacity. "It is up to Singapore who it wants to invite."

He declined to comment on reports that Prayut may meet with Thaksin, saying under the present circumstances and as the prime minister, Prayut is well aware of his roles.

Meanwhile, some senior government officials and Thai politicians visited the Singapore Embassy in Bangkok to sign a book of condolences.

The public has until this Saturday to sign the condolence book.

Tanasak said in his message to Singapore that he wished to express his deepest condolences on the passing away of Lee Kuan Yew.

Lee has left behind a lasting legacy on Singapore and the region at large, Tanasak said, adding he will always be remembered for his bold and visionary statesmanship in developing Singapore into a stable and prosperous nation.