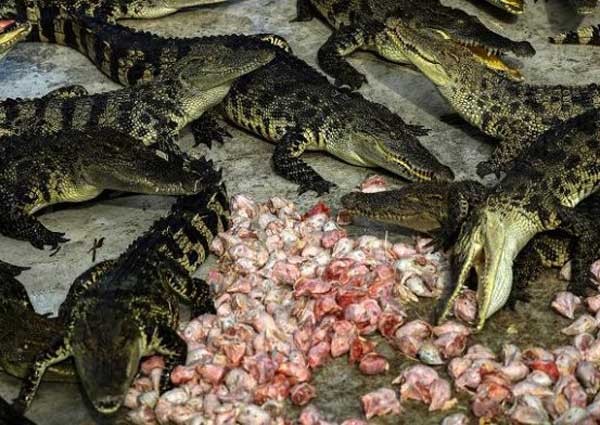 Crocodiles are seen at Sri Ayuthaya Crocodile Farm, one of Thailand's biggest, which has been operating for 35 years.
Reuters

Thailand is home to some of the world's biggest crocodile farms, where tourists can see the giant creatures lounging in the hot sun, chomping on chicken, or swarming in emerald green pools.

Some 1.2 million crocodiles are kept on more than 1,000 farms in Thailand, according to figures from the Thai department of fisheries. Some are equipped with slaughterhouses and tanneries to produce luxury products.

Sri Ayuthaya Crocodile Farm is one of Thailand's biggest, and has been operating for 35 years.

"We're an all-in-one farm, creating jobs for the people, creating income for the country," said Wichian Rueangnet, the owner of Sri Ayuthaya, which has an estimated 150,000 crocodiles.

Sri Ayuthaya is registered with the Convention on International Trade in Endangered Species of Wild Fauna and Flora (CITES), allowing it to legally export products made from the critically endangered Siamese freshwater crocodile. One of its top buyers is China.

"We do everything from raising crocodiles to slaughtering, tanning and exporting crocodile products," Wichian said.

Crocodile meat is sold for as much as 300 baht per kg (2.2 lb). The bile and blood of the reptile, made into pills because they are believed to have health benefits, are worth 40,000 baht and 500 baht per kg, respectively.

The industry has faced setbacks, as exports of Thai crocodile leather products fell more than 60 per cent in 2016 to 13 million baht, down from 34 million baht in 2015, commerce ministry figures show.

The following is a close up look at the booming industry, as seen through the lens of Reuters photographer Athit Perawongmetha.