Therapy dogs give comfort at dementia cafe in Japan 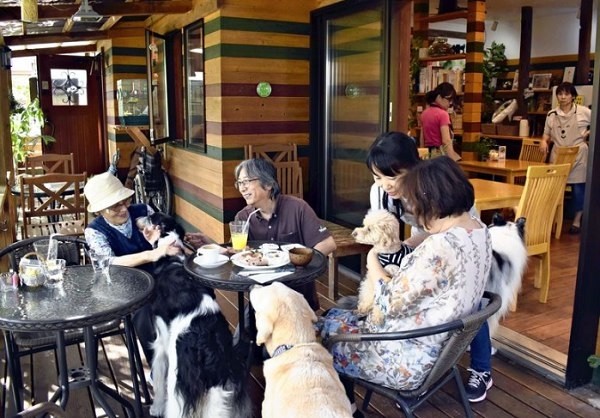 KANUMA, Tochigi - A therapy dog cafe in Kanuma, Tochigi Prefecture, has recently begun operating as a "dementia cafe" once a month to offer an opportunity for elderly dementia patients and their families to enjoy conversation over coffee and tea.

Therapy dogs that comfort people are stationed at Inu Cafe Maera. The comfort brought by having contact with animals, called animal therapy, is believed to be effective for dementia patients.

The cafe also has staff members who have learned about dementia.

"With dogs, psychological barriers between people are lowered. People with dementia may be able to open up to other people and enjoy conversation," a staff member at the cafe said.

On Oct. 2 at the cafe on the outskirts of the city, a woman in her 80s put a male Labrador retriever on her lap and petted it while smiling.

A woman accompanying her said: "She hasn't developed severe symptoms yet, but we came here to prevent the progression of dementia. She is more expressive than usual."

Dementia cafes are often operated by nonprofit organisations and others to offer opportunities to participate in society for people with dementia, who tend to be reclusive, and their families, who are concerned about their care. Usually, rooms in community halls and hospitals are used for such cafes.

According to the Health, Labor and Welfare Ministry, there were 5,863 dementia cafes across the country in fiscal 2017. A Tokyo-based association promoting dementia cafes said it is unusual for a dementia cafe to have therapy dogs.

Inu Cafe Maera is operated by the Tochigi Animal Therapy Association, which trains Labrador retrievers, toy poodles and other dogs and engages in activities to allow hospital inpatients and residents at elderly facilities to have contact with these dogs.

Hoping to have more people come in contact with therapy dogs, the association opened the Maera cafe four years ago.

The cafe began the dementia cafe activity due to an experience of Tsuyoshi Hirasawa, 57, the head of the Tochigi association. On a visit to an elderly facility, he saw a resident with dementia who almost always remained silent begin to speak when touching a dog: "I had a dog long time ago, and it ..."

Surprised by the incident, Hirasawa realised how profound the impact of therapy dogs on dementia patients could be. He decided to open a dementia cafe on the first Tuesday of each month, when the cafe was usually closed.

To prepare to accept dementia patients, staff members received a lecture from a training course for dementia supporters held by local governments so that they can deal with such people in a proper manner.

The cafe usually offers pasta, curry and cakes. On dementia cafe days, ingredients are cooked to be tender by staff members qualified as a nursing care food specialist to enable elderly people to easily swallow them.

Other measures are also taken for elderly people, such as lightly seasoning the ingredients and removing fish bones.

"I hope ordinary people also visit the dementia cafe to make it a place where they can communicate with dementia patients and their care workers," Hirasawa said.