These ads are so bad, they're attracting the wrong kind of attention 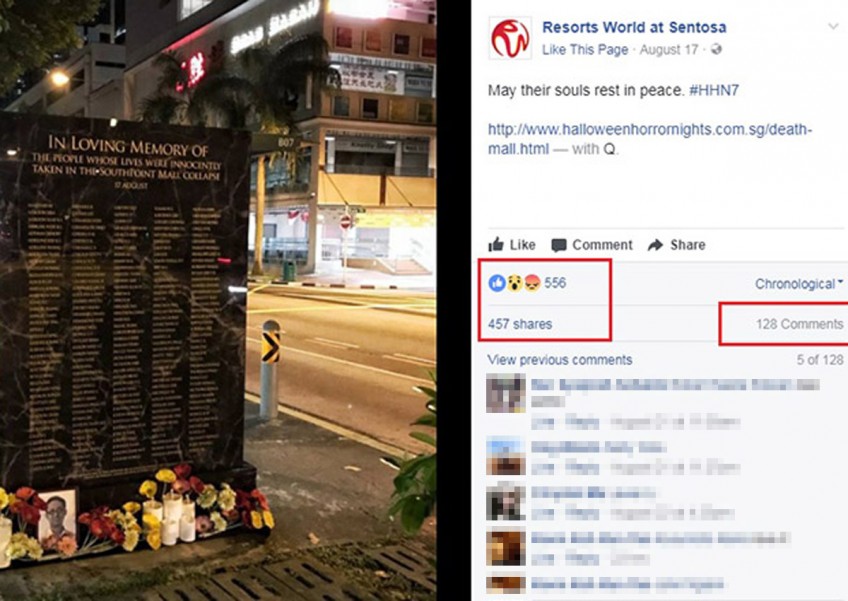 Resorts World Sentosa has received criticism for its publicity campaign involving a fictitious shopping mall collapse, but stands by its concept.
RWS blog

To increase brand awareness and drive product sales, some companies are willing to do just about anything to elicit a reaction from their target audience.

You'd think that living in hyperconnected, multicultural cities, we'd be more considerate of other people's feelings.

Instead of giving potential customers a good impression, these companies have incurred the wrath of netizens for rubbing them the wrong way.

This week, some Singaporeans had the fright of their lives when they spotted a life-size doll hanging from a tree at Orchard Road.

*SCAPE said that the mannequin was part of its efforts to promote the Halloween attraction The Museum of Horrors VII: Vengeance.

The scary sight prompted a Facebook post calling for the doll to be taken down because it was traumatizing the young and vulnerable.

Besides giving people the chills, the advertisement was linked with promoting suicide which happened right when Singapore is trying to raise awareness about suicide prevention.

Although *SCAPE said that it has since removed the mannequin, we don't think we'll be visiting that area anytime soon.

In July, German carmaker Audi pulled an ad in China after sparking a public outcry for disrespecting womenenn.

The video, which was shown online and aired in movie theatres, showed a woman who crashed her son's wedding to inspect his to-be wife by pulling and prodding at her face.

It was intended to promote Audi's used car division, however, we're not sure why it chose to do so by likening a bride to a secondhand vehicle.

The ad triggered a backlash on Chinese social media which led the carmaker to apologise and launch an investigation into what went wrong.

Meanwhile, Meat and Livestock Australia appears to have missed the memo on inclusivity by not doing their research properly.

What was meant to be a lamb feast for a plethora of gods from various religions failed to whet the audience's appetite.

India lodged an official complaint after the ad depicted Lord Ganesha - a Hindu god who is widely considered to be vegetarian - feasting on some mutton.

And despite an appeal by the Indian consulate in Sydney to withdraw the commercial, the advertisement appears to be viewable on Youtube.

And, we're quite certain that the Buddha prefers eating greens too.

What happens when you try to wash a cat in a washing machine?

Toshiba landed in hot water this June after pranking some unwitting customers of a laundromat in Malaysia.

They watched in horror as a man put a live cat into a washing machine and closed the lid.

Yowls then emerged from the home appliance.

While no feline was harmed in the filming, the ad was slammed online for promoting animal cruelty.

Maybe, it's time to clean up your act and pick better "digital media marketing experts", Toshiba.

'Blackface' may seem a no-brainer in the list of "things not to do" in Marketing 101, but Watsons Malaysia committed the elementary mistake in a 15-minute-long ad for Hari Raya this year.

In its retelling of the Malay folklore The Legend of Dayang Senandong, the male lead was smitten with a girl who had a beautiful voice.

When he finally saw her face, he asked: "Where are the lights? She is actually dark?"

As it turned out, she had used 'blackface' to test his sincerity. She later revealed her fair, glowy complexion, and the couple lived happily ever after.

The health and beauty chain issued an apology and removed the video from its social media accounts, but we doubt the video made whitening products fly off their shelves.

But how did these ideas ever leave the drawing board? We may never understand it but here's a marketing expert shedding some light on campaigns gone wrong.

While provocative campaigns may help a company stand out from the rest and in turn boost sales, the examples above show that they have the potential to backfire and damage a company's reputation.

We spoke with Ms Umah Devi, a marketing studies lecturer from Nanyang Polytechnic to understand how marketers deal with the aftermath of publicity stunts gone wrong.

While a campaign cannot possibly satisfy everyone, she said that it is important for marketers to show tact and sensitivity when the public responds negatively.

Whether it's to pull the advertisement or explain the company's stance and intended messaging, marketers have to react quickly.

Even before rolling out an ad campaign in public, marketers should develop a plan that looks at the key message they want to convey to their audience and whether it would spark the conversation among consumers that they had hoped for.

This also includes a study of the possible reactions to the campaign using a test group. And with the speed that advertisements get circulated on social media, it is important to put in place a crisis management plan.

Also read: Malaysian ad implies being slim and fair is what you need to keep your husband, and commenters agree