Hong Kong Police are looking for two separate groups of thieves after two incidents in Yau Ma Tei on Monday.

Hong Kong police were on Monday hunting two groups of thieves after a jewellery shop was burgled and a businessman robbed in the same district within 90 minutes, with about HK$1.2 million (S$209,000) worth of valuables stolen.

A police source said the thieves were all men, all wore caps, masks and black clothes, and were of Chinese and South Asian descent.

One had a hammer and two others brandished knives during the robbery, the source said, adding that the culprits fled before police arrived.

The force initially said the gang stole more than HK$1 million worth of gold ornaments, but the source said officers were still determining what was taken and its exact value.

The shop's owners, a couple in their 70s, were inside the property at the time but were not injured.

The attack came an hour and a half after a local businessman was robbed about 300 metres away, on Man Ming Lane.

Police were still searching for the two robbers, who attacked the Hong Kong resident near Yau Ma Tei MTR station, stealing HK$200,000 which he had withdrawn from a nearby bank. The victim of a robbery was taken to Kwong Wah Hospital in Yau Ma Tei. PHOTO: South China Morning Post

"The two culprits were wearing caps, masks and black clothes, and hit the victim on the head with a wooden rod several times and pinned him to the floor before snatching his bag, containing HK$200,000," the source said.

The source said the two robbers - believed to be Chinese men in their 20s - fled on foot towards Tsim Sha Tsui before police arrived, and it was likely they had targeted the victim while he was in the bank.

The victim was taken to Kwong Wah Hospital with head injuries. It was understood he had withdrawn the money to assist his family's business.

There has been a sharp rise in the number of robberies reported across Hong Kong in the past six months, as anti-government protests and violent clashes occupy police resources. 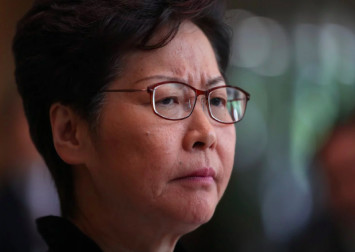 Since August, local police have stopped patrolling city streets on foot because of the protests and the perceived risk of being attacked. Instead, they have patrolled only in vans.

The annual winter crime-fighting campaign, during the Christmas and New Year season, was also cancelled because police resources have been tied up with protests.

There was about one robbery every day in October, according to police, up from one every two or three days in 2018.

On Sunday night, three masked robbers looted a watch shop in the city's shopping district Causeway Bay at about 7 pm, after threatening staff with a fake gun. The trio made off with 12 watches worth about HK$600,000.

Police expressed concern on Monday over the worsening crime situation in the past six months. They said the number of burglaries had surged 44 per cent to 2,056 in the first 11 months this year over the same period in 2018 while robberies rose 28 per cent, to 170.

Chief Superintendent Kenneth Kwok Ka-chuen of the police public relations branch said: "Last year, we recorded the lowest crime rate in 44 years … However, very sadly, the violent stance of rioters has pushed our rule of law to the brink of total collapse. 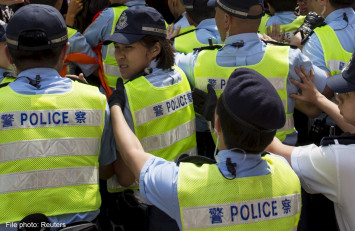 "Since June, there has been a significant increase in hard crimes including burglary, arson and armed robberies. There have been certain cases involving genuine firearms. What's worse is that some lawless people wilfully obstruct police from carrying out their duties."

He said guns could have been smuggled by mailing separate pieces, or brought in by people or hidden among the cargo. Li said police would co-operate with other departments to catch those involved.

"We are also in communication with law enforcers overseas to tackle this issue," he said.