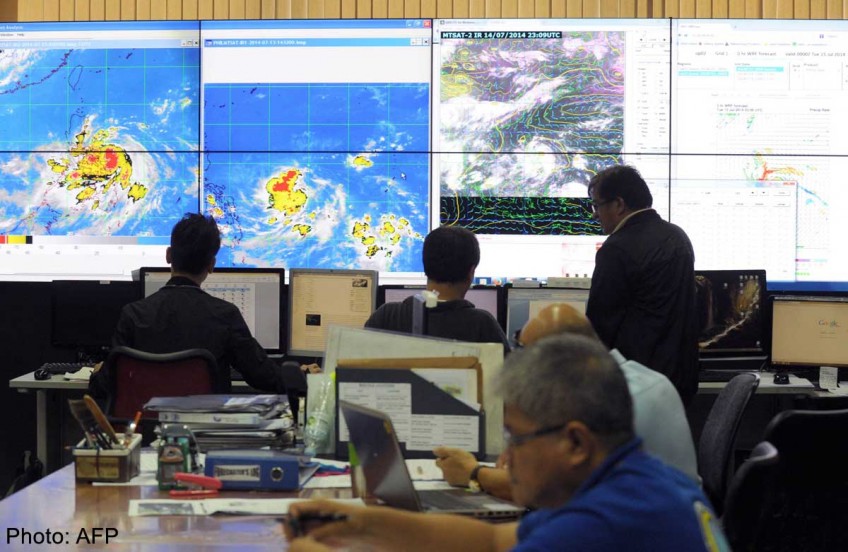 Meteorologists monitor the movement of typhoon Rammasun at the Philippine Atmospheric, Geophysical and Astronomical Services Administration in Manila on July 15, 2014.

MANILA - Thousands of people fled their homes and ships sheltered from heavy seas in the Philippines on Tuesday as the first major storm of the rainy season strengthened into a typhoon.

Typhoon Rammasun was set to strike the Bicol region in the east of the country at 6:00pm (1000 GMT), with Manila and other heavily populated areas also expected to be hit early Wednesday, the state weather service said.

"We are preparing for the worst... it is critical now that we finish the evacuations," said Rafaelito Alejandro, civil defence chief of Bicol, an impoverished farming and fishing region of 5.4 million people.

About 6,000 residents had already moved to evacuation centres, with authorities aiming to have another 39,000 take shelter before the typhoon hits, he said.

"If we can finish the evacuation, then it's just a waiting game to see what happens," Alejandro told AFP by telephone.

The Philippines is hit by about 20 major storms a year, many of them deadly. The Southeast Asian archipelago is often the first major landmass to be hit after the storms build above the warm Pacific Ocean waters.

In November last year, Super Typhoon Haiyan brought the strongest winds ever recorded on land to the central Philippines, killing up to 7,300 people in one of the nation's worst ever natural disasters.

Rammasun will be the first to make landfall since this year's rainy season began in June, and authorities as well as local media were seeking to ensure all potentially impacted communities were well informed and prepared.

The state weather service upgraded Rammasun overnight Monday from a tropical storm into a typhoon as its wind speeds built over the Pacific.

Rammasun, which is Thai for "God of Thunder", is expected to have gusts of up to 180 kilometres (114 miles) an hour when it makes landfall, according to the US military's Joint Typhoon Warning Center.

Its eye was about 190 kilometres southeast of Legazpi, Bicol's largest city, at 9:00am (0100 GMT), the Philippine weather service said.

After Bicol it is forecast to pass over Manila, around 350 kilometres northwest of Legazpi, and its more than 12 million residents on Wednesday morning, according to the weather service.

The government cancelled most classes in Manila and Bicol on Tuesday, while dozens of domestic flights were also grounded.