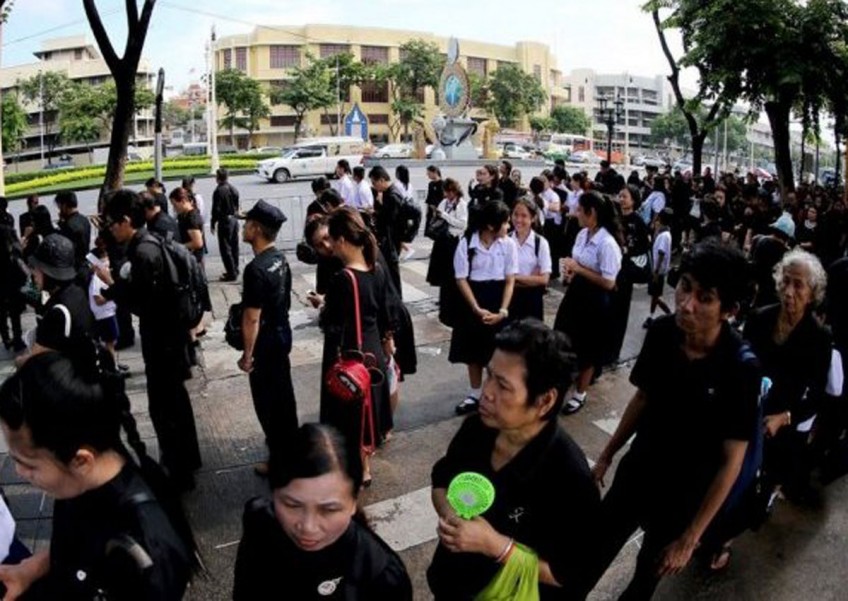 BANGKOK - Almost 12 million people, or almost one sixth of Thailand's population, have visited the glittering Grand Palace in Bangkok to pay their respects to the late King Bhumibol Adulyadej since he died last October, the palace said on Thursday.

Thousands lined the streets of Bangkok's historic area near the Chao Phraya River to enter the palace on Thursday, the last day to see the late king before the royal cremation on Oct. 26.

Queues stretched for more than two km (1.2 miles), officials said, with many lining up since Wednesday.

"I've been here since 6 pm and I managed to pay respects at 7 am," Tossapon Thongmak, 33, a Bangkok resident.

"We were rained on last night but this is a must - we must pay our respects to father," he said.

King Bhumibol died last October aged 88 and his body has laid in state in a gold hall at the palace.

He was widely seen as a father figure and regarded as the nation's moral compass during decades of on-off political turbulence including several coups, bloody street protests and a region-wide 1997/98 financial crisis.

He was succeeded in December by his only son, King Maha Vajiralongkorn, known as Rama X, who has since overseen a shake-up at the palace to give himself greater authority.

The royal funeral will be a mix of Buddhist religious ceremonies and Hindu Brahmin rituals.

"This is the first time that many Thais will experience a royal funeral for a monarch. So the grandeur, the beauty, and the determination of everyone involved in the preparation is a new experience for all," Tonthong Chandransu, a public relations official for the funeral organisation committee and an expert on the Thai monarchy, told Reuters in an interview.

"From the architecture, the craftsmanship, the various preparations and their fine details, I have never seen this sort of dedication." Builders have been working for months on a royal crematorium that was built from scratch on a green in front of the palace.

"Time was needed in order to build heaven, based on imagination and belief systems that fused Buddhism with Brahmin Hindu traditions that are important in Thai society," Tonthong said.

The palace has said it expects 250,000 mourners to attend the royal cremation.

Thailand's tourism body has asked tourists to respect Thai sensitivities during what promises to be an emotionally-charged time.