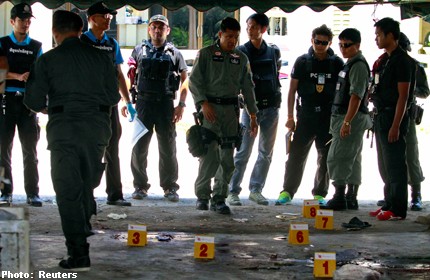 Thai security personnel inspect the site of a shooting at a tea shop in Thailand's southern Yala province August 24, 2013.

BANGKOK - Gunmen dressed as local officials killed three Muslim civilians at a tea shop in Thailand's insurgency-hit south on Saturday, according to police, in the latest act of violence in the festering rebellion.

"They were dressed like security officials and carried official documents pretending that they were there to gather information," Major Prathuang Suwanchatri of Raman police said.

"All three victims were former village headman or deputy headmen who had cooperated with authorities in the past," he said, adding another person was injured in the shooting.

Yala is one of several provinces in Thailand's Muslim-majority south, where some 5,700 people have been killed since the insurgency flared in 2004.

Rounds of peace talks in Malaysia between Thai authorities and some rebel groups, including the Barisan Revolusi Nasional, had raised tentative hopes of peace.

But the rebels had threatened to pull out of the peace dialogue, although new discussions about the direction of the peace talks took place on Friday.

After the meeting Thailand's army chief General Prayut Chan-O-Cha said authorities were willing to continue talks next month, but urged rebels to end their attacks.

"We regret all of the losses and injuries but if you (the rebels) want to submit demands, you must stop all violence first," he said, adding a key insurgent demand to have the region recognised as an autonomous zone was not possible as it is breached the kingdom's constitution.

Talks began on March 28 in neighbouring Malaysia but have so far failed to halt near-daily violence, raising questions about the rebel group's influence over increasingly violent grassroots insurgents.