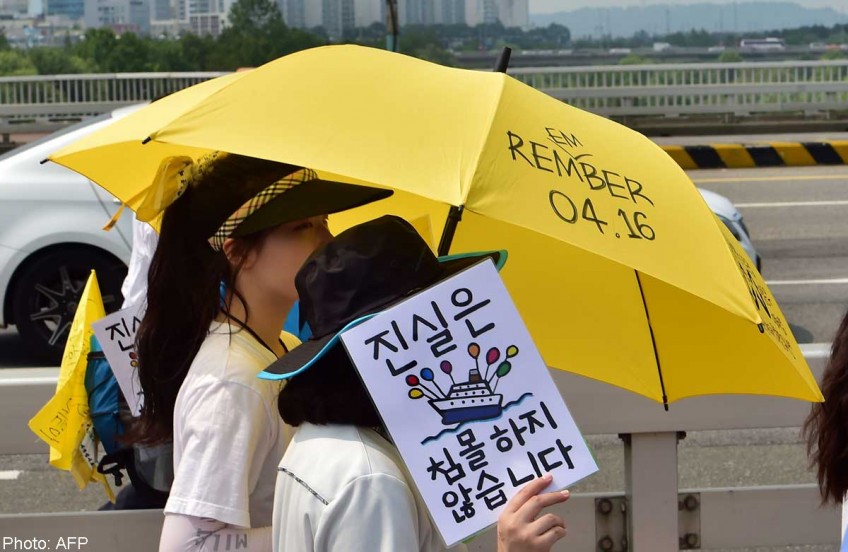 A student survivor of South Korea's ferry disaster carries a placard reading "Truth never sinks!" as they march near parliament in Seoul on July 16, 2014 to press demands by victims' relatives for an independent inquiry into the tragedy that claimed around 300 lives.

SEOUL - Divers retrieved another body Friday from the site of South Korea's ferry disaster - the first to be recovered in nearly four weeks from the submerged vessel that sank three months ago.

The body of a female was found inside a dining hall of the upturned ferry which is lying on the seabed at a depth of 40 metres (130 feet), rescue authorities said.

The 6,825-tonne Sewol ferry was carrying 476 passengers and crew - including 325 high school students - when it capsized and sank off the southern coast on April 16.

The latest body brings the number of confirmed dead to 294, with 10 victims still unaccounted for.

Although more than three months have now elapsed since the disaster, dive teams continue to carry out dangerous daily missions to scour the inside of the vessel for the missing bodies.

Victims' families insist that heavy cranes can only be brought in to lift the ship once all the victims have been accounted for.

President Park Geun-Hye and her administration have been bitterly criticised for their response to the disaster, which stunned the entire country.

A recent report by the state auditor said the sinking was a "man-made disaster" created by negligence, corruption and greed.

Fifteen Sewol crew members are on trial, including the captain and three senior officers who are accused of "homicide through wilful negligence" - a charge that can carry the death penalty.

The bulk of the charges arise from the fact that they chose to abandon the ferry while hundreds of people were still trapped inside.

More than 30 student survivors marched on parliament this week to press demands by victims' relatives for parliament to pass a special bill setting up an independent inquiry.

The bill has been stuck in the National Assembly because of disputes between ruling and opposition lawmakers over the legal powers any inquiry panel should be given.

[[nid:104594]]
SUBSCRIBE TO OUR NEWSLETTER
Your daily good stuff - AsiaOne stories delivered straight to your inbox