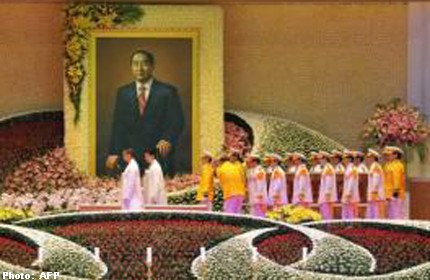 Unification Church guards carry the coffin of founder Sun Myung Moon at his funeral in South Korea on September 15, 2012.

SEOUL - Three Japanese Unification Church members set themselves on fire in South Korea Thursday before the first anniversary of the death of the controversial church founder Sun Myung Moon, a report said.

The two women and one man had doused themselves with paint thinner and set themselves alight in a village at the church's global headquarters in Gapyeong east of Seoul, Yonhap news agency said.

They suffered severe burns and two of them were in serious condition, it added. Church officials were not available for comment.

Moon died at the age of 92 on September 3 last year, but followers observe August 23 as the first anniversary of his passing according to the lunar calendar.

Moon, revered by his followers but described by critics as a charlatan who brainwashed church members, was a deeply divisive figure whose shadowy business dealings once saw him jailed in the United States.

The teachings of the Unification Church are based on the Bible but with new interpretations. Moon saw his role as completing the unfulfilled mission of Jesus to restore humanity to a state of "sinless" purity.

While the church claims a worldwide following of three million, experts suggest the core membership is far smaller.