Toilets that clean themselves catching on in Japan 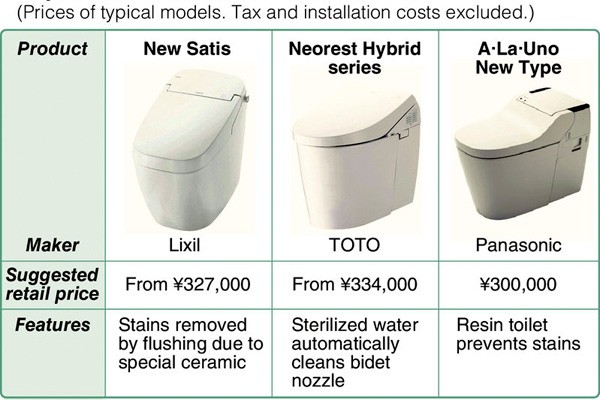 Japan is well-known for its highly functional toilets with their built-in bidets, but lately they have become even more pleasant to use. The newest models not only clean your posterior, they also clean the toilet bowl by such means as a special ceramic product and water.

A Western-style flush toilet was first manufactured in Japan by the predecessor of TOTO Ltd. in 1914. A predecessor of Lixil Corp. began sales of the first domestic toilet seats with built-in bidets for households in 1967, based on a Swiss-made toilet used in hospitals.

From then on, toilets with integrated bidets gradually became widely accepted in Japan. According to a Cabinet Office survey, such toilets were installed in about 77 per cent of houses in this country as of March 2015.

Shiohiko Takahashi, a professor emeritus at Kanagawa University who chairs the Japan Toilet Association, said: "The Japanese like to keep things neat. Water supply and sewerage systems are relatively well maintained, which bolstered the idea of washing your posterior with water."

In Japan, toilets are kept separate from the bath in many households, meaning the power source of sophisticated toilets does not get wet. In addition, soft water is used to flush the toilet, meaning that its spray nozzle does not become clogged with minerals, unlike hard water. These factors have helped make this type of toilet more popular in Japan.

Makers are now focusing on toilets that automatically clean themselves.

In April, Lixil released its New Satis model (¥327,000 (S$4,000) excluding tax), which uses a special ceramic product to clean the basin - water flows underneath filth on the ceramic surface and lifts it up. Also, water flows out from three places in the basin, helping the toilet flush with a limited amount of water.

"Cleaning toilets is hard work. We developed the model in response to appeals from elderly people and couples who both work," a Lixil spokesperson said.

TOTO's Neorest Hybrid series (¥334,000 excluding tax) uses hypochlorous acid, which is produced by decomposing tap water through electrolysis. The solution is sprayed onto a basin before and after toilet use to break down and remove stains.

The ceramic basin is specially glazed to resist stains. The Neorest series' highest-grade model, which was released in February 2015, is equipped with a filter to eliminate ammonia, a cause of foul odour.

To reduce urine-derived stains, Panasonic Corp. released its A・La・Uno New type (¥300,000 excluding tax) in June 2014. A company spokesperson said the company believes urine is "the main cause of dirty toilets."

The water level in the basin lowers when the lid opens, and a cleanser foam appears on the water's surface to keep urine from spattering. The edge of the basin swells by three millimeters in a bid to keep urine inside the bowl. The basin is made of resin with a smooth surface, so stains are less likely to collect on the basin.

These models are not only installed in newly built houses but also when houses are renovated.

Toilets a draw for tourists

Japanese toilets have received a great deal of attention overseas and are even a popular item for foreigners who go on shopping sprees when they visit Japan.

TOTO questioned about 150 foreign tourists in Tokyo and Kyoto in 2015, and learned that 56.5 per cent of them looked forward to using toilets at their accommodation in Japan, a figure close to the 57.8 per cent who ranked "service" as their top expectation.

The survey indicated that a toilet is considered more important than meals and rooms during their visit. Japan's sophisticated toilets apparently are seen as a symbol of "omotenashi," traditional Japanese hospitality.

At major home appliance retailers, toilet seats with built-in bidets that can be installed on existing lavatory basins sell well among foreign visitors. In fiscal 2015, the sales volume of Panasonic's model, which costs about ¥60,000, quintupled from a year earlier.