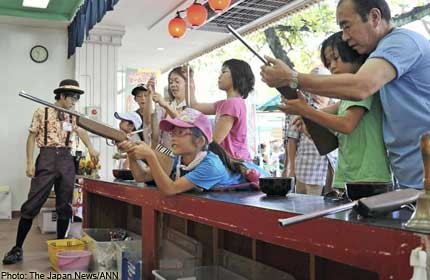 JAPAN - Asakusa Hanayashiki Amusement Park may be small but it is jammed with popular retro rides and has been loved by both young and old for more than 150 years now.

The park, situated in Tokyo's traditional downtown area of Asakusa, owes much of its broad appeal to its unique Showa era (1926-1989) atmosphere. Its 160th anniversary celebration on Wednesday, which coincided with schools' summer recess, attracted not only parents with children but also three-generation families.

The park was originally opened in 1853 as a botanical garden featuring exhibitions of flowers such as chrysanthemums, but later, during the Meiji era (1868-1912), it was equipped with rides including wooden horses. After World War II, it became recognised as an amusement park as it introduced the nation's first domestically made roller coaster in 1953.

On Wednesday, visitors formed an eager line at the entrance as they waited for the park to open at 10 a.m. As the gates swung wide, children rushed to the 60-year-old roller coaster, which is still the most popular ride and has become something of a park emblem. Although it travels the 230-meter track at only 40 kilometers per hour, the roller coaster still incites loud screams from those who ride it.

"It doesn't go fast, but it rocks hard so it's scary. It's fun to be able to enjoy so many rides in such a small park," a woman from Yokohama, 30, said enthusiastically, adding that it was her first time visiting the amusement park.

Hiroki Nagai, a 48-year-old public official from Ueda, Nagano Prefecture, said that he was visiting the park for the second time with his family of four while on summer holiday. "We came today because my children wanted to ride on the roller coaster again. I really hope this place doesn't ever change."

"The park is appealing because it's remained the same [for all these years]," said photographer Takeo Akiyama, 76, about the Showa-era charm of Asakusa Hanayashiki Amusement Park. He has been taking pictures of Tokyo's shitamachi traditional areas since the nation's postwar economic growth period.

Akiyama said he has been drawn to the amusement park since he was a teenager, soon after he began using a camera. He said his pictures of the park date back to 1953, as he would take photos every time he visited Asakusa.

Shitamachi areas have changed a great deal in appearance due to the rapid economic growth period. "But Hanayashiki maintains a retro atmosphere," he said. He also said the park's contrast with modern buildings like Tokyo Skytree adds to its appeal.