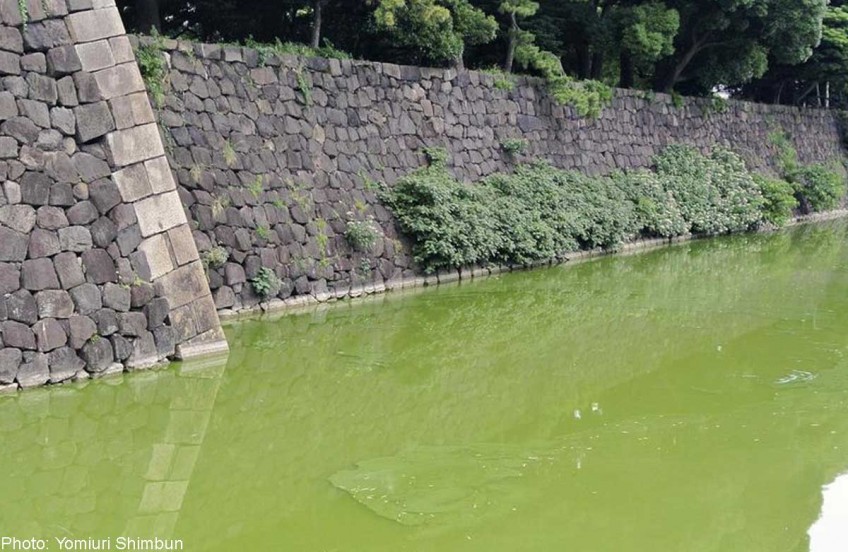 Water in the Hibiyabori moat has turned green due to a massive proliferation of blue-green algae.

The Environment Ministry is considering using groundwater welling up from subway tunnels to improve the water quality in moats surrounding the Imperial Palace, The Yomiuri Shimbun has learned.

The idea is part of the ministry's efforts to ensure the 2020 Olympics and Paralympics in Tokyo are environmentally friendly events. Cleaning up the water would be aimed at attracting foreign tourists to the beautiful scenery of the Imperial Palace, a major landmark.

There are 12 moats around the Imperial Palace, including the Chidorigafuchi moat, a famous spot for cherry blossoms, and the Hibiyabori moat near the central government offices in Kasumigaseki. The moats hold a combined 450,000 cubic meters of water.

A major problem is the explosive growth of blue-green algae in summer. Higher water temperatures raise the concentration of such nutrients as nitrogen compounds, resulting in algae-clogged moats that emit a foul smell.

According to the ministry's Kokyogaien National Garden Office which manages the moats, water quality has been deteriorating because clean water has stopped flowing into the moats and water does not circulate.

Clean water once flowed in from the Tamagawa Aqueduct, built during the Edo period (1603-1867). The Yodobashi water treatment plant in Shinjuku Ward, which supplied the moats with clean water, was shut down in 1965.

Rainwater is now the only source of clean water that flows into the moats. To make matters worse, water quality is further degraded by human waste spilling out of sewer pipes during heavy rain.

The ministry has installed new facilities to purify moat water and remove algae based on a water quality improvement plan drawn up in 2010. However, this measure failed to stop the massive buildup of the algae.

The Tokyo metropolitan government is also conducting repairs on a sewerage system to prevent waste from flowing into the moats, with completion scheduled for fiscal 2015. However, the ministry has decided to take drastic measures to improve moat water quality out of concern that current efforts would not be sufficient to prevent the algae infestation.

The ministry then set its sights on the subway network around the Imperial Palace.

From 1987 to 1989, the ministry temporarily used groundwater, which welled out during the construction of an underground platform on the Keiyo Line at JR Tokyo Station, to improve the water quality. The ministry confirmed the method was effective.

Based on this experience, the ministry is now considering the possibility of purifying water in the moats by using groundwater that seeps from subway tunnels to remedy the algae conundrum.

According to Tokyo Metro Co., about 70 tons of groundwater seeps from subway tunnels around the Imperial Palace every day, which is discharged through sewage pipes. Some areas channel the groundwater into rivers to improve water quality.

Because the environs of the Imperial Palace are located near the sea, the seeping groundwater may have high salinity. The ministry has therefore begun preparations for the water purification plan, including requests with Tokyo Metro and the metropolitan government that operates the Toei subway lines to provide such data on the amount and quality of groundwater welling up from subway tunnels.

The ministry plans to hold a meeting attended by experts in August to draw up a concrete plan.

Blue-green algae populations explode during July to September, a period when the Tokyo Games will be held. "We want to improve the water quality in the moats because we will have many visitors from other countries [during the Tokyo Games]," Environment Minister Nobuteru Ishihara said.

"There are many issues to discuss, including the best way to channel groundwater [into the moats], but we want to eradicate blue-green algae before the Tokyo Games," said Takeshi Tobishima, a senior official from the Kokyogaien National Garden Office.