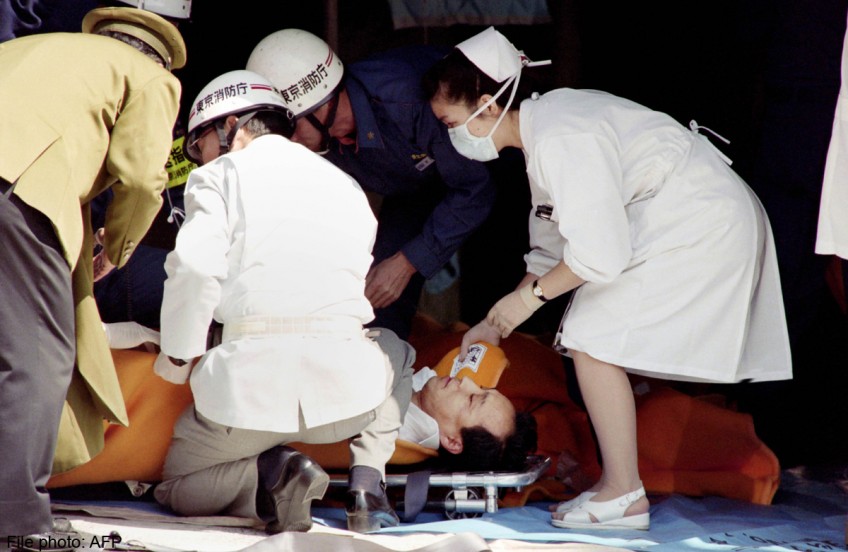 This file picture taken on March 20, 1995 shows a commuter being treated by an emergency medical team after being exposed to Sarin gas fumes in the Tokyo subway system.

As Japan prepares to mark the 20th anniversary of a fatal nerve gas attack on Tokyo's subway, experts say the horrifying case still leaves more questions than answers about what motivated the killings.

Despite a plethora of trials over the last two decades that have put 13 people, including cult leader Shoko Asahara, on death row, the reasons behind the shocking episode remain unclear.

Particularly baffling is the fact that those responsible for the cult's worst crimes were some of Japan's best and brightest - scientists and doctors who had graduated from the country's top universities.

The high-profile trials could have been "an opportunity for Japan to share insights with the world as it fights terrorism, by fully understanding what happened with Aum, not just dealing with the crimes and charges at hand," said Kimiaki Nishida, a social psychology professor at Rissho University.

At a time when the world is grappling with a rise in extremism, in particular the self-styled Islamic State (IS) group - which brutally executed two Japanese hostages this year - understanding exactly what happened and why is more important than ever, he said.

"I see that similar types of young people are getting sucked in (to IS) today," Nishida added.

"They are looking for a place where they are highly valued, feel that they are needed, and are praised for being useful to others."

Japan had watched with a nervous fascination as Aum germinated and expanded in the 1980s and 1990s.

The half-blind mystic Asahara, now 60, was a guest on television shows, where he was treated with a mixture of awe and curiosity.

His blend of Buddhist and Hindu dogma, liberally sprinkled with visions of the apocalypse, attracted more than 10,000 followers at its height.

Believers were told that Asahara was a saviour who could wash the world of its sins as it rolled towards its unavoidable end.

Asahara became obsessed with the idea his enemies would attack him and secretly ordered followers to produce sarin at what was later discovered to be a sophisticated chemical weapons laboratory.

In what some believe was an attempt to divert the authorities that Asahara thought were closing in on his base in the foothills of Mount Fuji, he sent five teams of two people to attack the Tokyo subway, which is used by millions of daily commuters in the sprawling metropolis.

Five adherents - among them a senior medical doctor and several high-flying physicists - dumped packages of sarin on busy trains, puncturing them with sharpened umbrella tips, before being driven away from a pre-determined station by their co-conspirators.

The nerve gas, so toxic that a single drop can kill a person, evaporated over the following minutes as thousands of unwitting commuters got on and off each train.

Staff and passengers were among the dead. Many of those sickened only realised what had happened as their symptoms worsened throughout the day and news broadcasts began piecing events together.

Aum was never officially disbanded. It went bankrupt because of the massive damage payments it was forced to make to victims of its crimes.

Some justify Asahara's murderous orders as instructions to help his followers achieve enlightenment, according to the Public Security Intelligence Agency, which monitors cults.

The sect's continued existence, albeit closely surveiled and in a different guise, worries those affected by the 1995 attack.

"The successor groups are still operating, and there is no telling what Aum followers will do," said Shizue Takahashi, whose subway worker husband died in the attack.

Cultists who carried out the sarin attack are among those giving evidence in what is expected to be the final court case related to the subway gassing, after the 2012 arrest of the final fugitive.

Still, it prompts more questions than answers, said Yuji Nakamura, a lawyer who has dealt with a number of Aum cases.

"We are seeing death-row inmates... speak before our eyes. They are very articulate, bright and polite. Some of them behave almost like monks," Nakamura said.

As the world reels from the latest murderous attack on a soft target - the killing of 19 people in a Tunisian museum, at least three of them Japanese - understanding what makes people susceptible to extremist groups is increasingly important, said academic Nishida.

"(Aum) Cult members did not hold grudges against their victims. Rather, they murdered and caused harm for what they believed were just reasons," he said.

"Orders came from an absolutist figure - the guru - who was beyond human, who they believed could not make mistakes. They thought it would be wrong to question what he commanded."

When the final legal chapter closes and the death sentences are carried out, Japan will lose an opportunity to explain what drives seemingly normal people to these extremes.

"Did we have the kinds of trials that did that? Did we fully understand (the cultists') hearts and minds?" said Nishida.