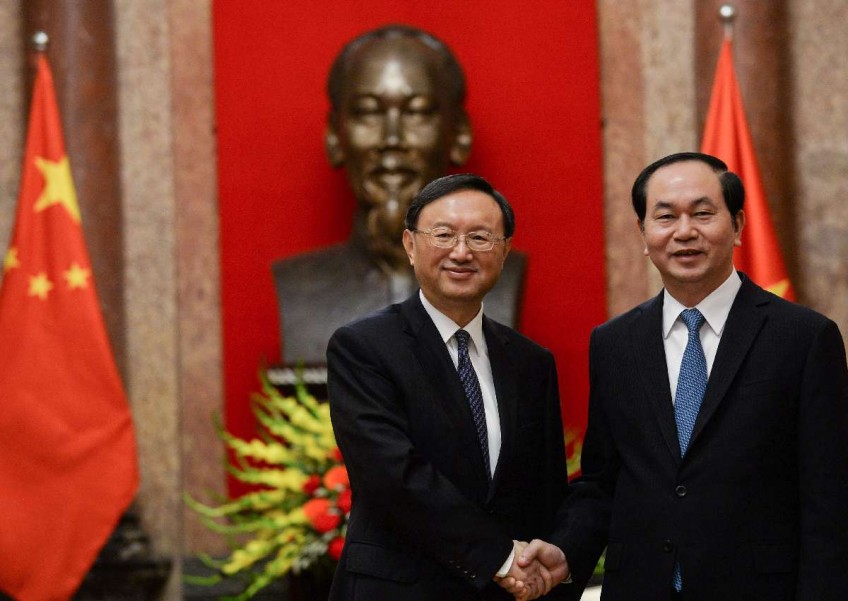 HANOI - China's top diplomat met Vietnam's leadership on Monday during a scheduled visit aimed at strengthening historically close relations at a time when ties are strained by squabbles over the South China Sea.

The trip by State Councillor Yang Jiechi comes amid a Chinese public relations blitz to try to discredit a looming verdict by an international tribunal, which could aggravate tensions if it undermines Beijing's vast claims to waters extending far into Southeast Asia.

That included "controlling conflicts well, boosting negotiation mechanisms ... and finding basic and long-term solutions that both sides can accept through peaceful exchanges and negotiations", the ministry said in a statement.

He later met with Vietnam's president and its Communist Party chief.

His visit comes as the region braces for the verdict in the case brought by the Philippines in 2013 to the Permanent Court of Arbitration in The Hague seeking clarification of parts of United Nations maritime law.

China has said 47 countries support its refusal to recognise the case. Its diplomats have written editorials in regional newspapers denouncing what has been seen widely as a bold move by Manila, with scope for repercussions.

Incoming Philippine president, Rodrigo Duterte, on Monday said he would not discuss it until a ruling was made.

China claims almost the entire South China Sea, where about $5 trillion worth of trade passes every year. Brunei, Malaysia, the Philippines, Taiwan and Vietnam also have claims.

Experts had said it was unlikely Yang would seek a sympathetic ear from Vietnam, which has trust issues with China and has recently grown closer to the Philippines.

Vietnam is not involved in The Hague case but stands to benefit from a positive ruling for Manila and has echoed its opposition to China's fortification of artificial islands, the conduct of its coastguard and perceived intrusions into its exclusive economic zone.

Ha Hoang Hop, a Vietnamese academic who has advised the government, said there was "no hidden agenda" behind Yang's visit and no compromises would be made over the South China Sea.

The court is expected to rule in the coming months and there are concerns in the United States about how China could react should the verdict not work in its favour.

Both sides have accused each other of trying to militarize a shipping route vital to the stability of the global economy.