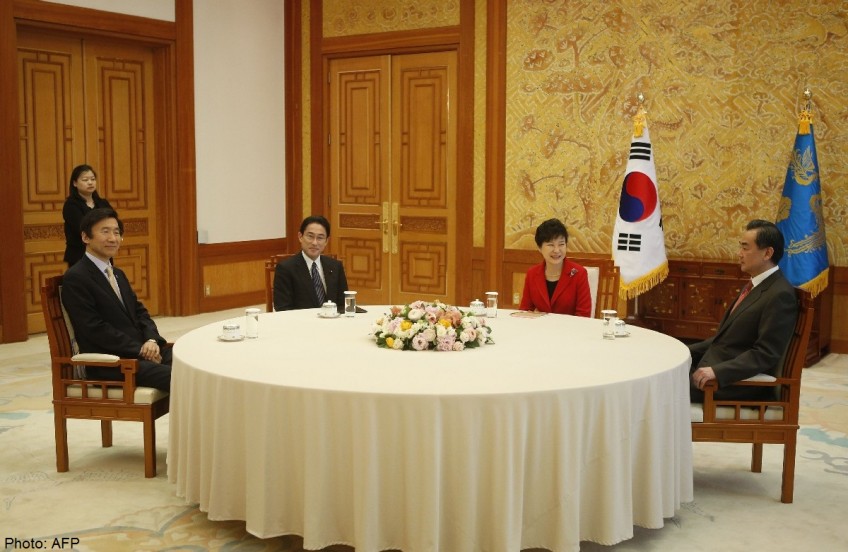 SEOUL - The foreign ministers of South Korea, Japan and China meet on Saturday for the first time in three years, to try and improve frosty ties and restore a regular three-way summit of their leaders, stalled because of tension over history and territory.

The three officials also held bilateral meetings in which they agreed to co-operate in response to North Korea's nuclear and missile programmes.

Arriving for a meeting with South Korean Foreign Minister Yun Byung-se, China's Wang Yi said he would discuss all the issues of interest to Beijing, signalling the subjects of the China-led Asian Infrastructure Investment Bank (AIIB) and the THAAD missile defence system were not off the table. "They pledged to work together to resume meaningful dialogue for substantive progress on ending the North's nuclear programme and to cut off advances in its nuclear capability," South Korea's foreign ministry said after a meeting of the South Korean and Chinese ministers.

The meetings take place against the backdrop of South Korea and China's cool ties with Japan over what they see as its reluctance to properly atone for its wartime past. Both also have territorial disputes with Tokyo over islands.

The three-way talks, set for later on Saturday, will be a stepping stone towards restoring what had been an annual summit of the three countries' leaders to discuss co-operation, Yun said this week.

Japan and South Korea, major regional US allies along with Australia, are notable absentees from the Bank, though Japan says it is reviewing prospects of joining.

The United States, worried about China's growing diplomatic clout, questions whether the Bank will have adequate governance and environmental and social safeguards.

Both China and Japan claim a tiny group of islets in the East China Sea while South Korea and Japan have a separate island dispute.