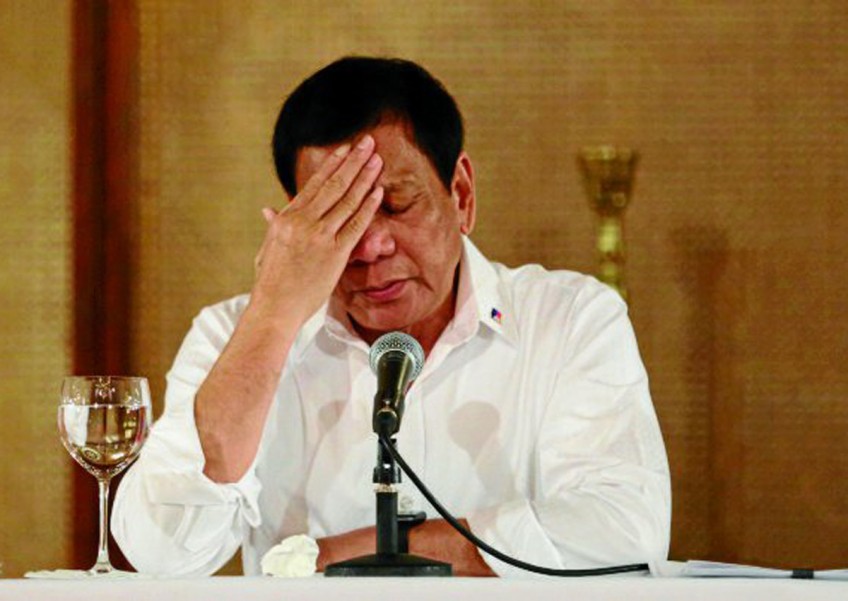 Despite a tough guy image, President Rodrigo Duterte continues to have a soft spot for the one woman he has the highest respect for-his late mother, Soledad Roa.

Mr. Duterte took the chance to pay tribute to Soledad, a leading opposition figure during the Marcos dictatorship, at a speech before women supporters in Malacañang.

"My sorrow really is that I hope she had seen me become president," Mr. Duterte said at the Digong's Day for Women affair in Malacañang.

But the President, who often shares stories of his past as a troublesome student who took seven years to finish high school, joked that his mother would have been incredulous at the turn of events.

Benefit of the doubt

He said women who have troublesome children like him should give their kids the benefit of the doubt. "They might become president," he added.

He recalled how Soledad supported him and his siblings after being widowed.

According to Mr. Duterte, Soledad had a nervous breakdown after the death of husband Vicente.

It was a time when Mr. Duterte and his siblings were still in school. The family, he said, got mired in debt after the loss of his father.

When Soledad recovered from the illness, she had to look for money to send her children to school. Mr. Duterte recalled offering to stop his law studies in San Beda and transfer to Davao, but Soledad told him to stay put.

His mother's inheritance from her parents was used up, but he and his siblings finished school and he became a lawyer.

"I never practiced here in Manila. I said I would just help out in our manggahan (mango grove) because I pitied my mother," he said.

While extolling his mother, he also recalled the physical punishment he received from Soledad.

"When my mother gets angry, she would hit me with whatever she could grab," said the President.

"She was a bit of a child abuser. If that happened now, she would have faced cases," he said with a smile, eliciting laughter from his audience.

He also recalled being made to kneel in front of the altar with his arms spread like those of Jesus' in the crucifix.

But throughout all those, Mr. Duterte said Soledad's support for him never wavered.

"I am not trying to marginalise my father but I've always been close to my mother because she was the only one who stood by me," he said.

When he dies, he said, he would like his cremated remains to be placed beside the urn that holds his mother's ashes.

During his speech, Mr. Duterte also defended himself from criticism that he was a "chauvinist pig." "I just like to joke around," he said.

"I am not really a bad boy, do not believe that. You know me, when was I ever disrespectful to women?" he later added.

He said he could not in conscience be abusive to women because he has daughters who might be subjected to the same kind of abuses.

He jokes around with female aides, he said. He slaps them playfully and jokingly called one nurse ugly.

As mayor of Davao, Mr. Duterte said he would often come to the defence of women being abused by their husbands.

The President had been denounced for statements and actions degrading to women, among them joking about how he should have been first in line to rape an Australian hostage.

He had also once catcalled a reporter during a press conference.

Mr. Duterte also continued to receive flak for his frequent use of expletives, which spared no one.

On Friday, the President showed no sign of changing this, recalling an advice given him by Sen. Panfilo Lacson who said his birthday wish for Mr. Duterte was for the President to be statesmanlike.

Mr. Duterte said he tried and even bought a book on how to be a statesman. But he said he simply could not see himself being prim and proper.

"Statesman, statesman," Mr. Duterte said. "It's Lacson I see, not me. You just become the next president," he said, addressing himself to Lacson.

"I would not become a statesman. Frankly, I've never graduated to being really a president," he said.

He said his character remains to be that of a mayor- crass and uncouth.